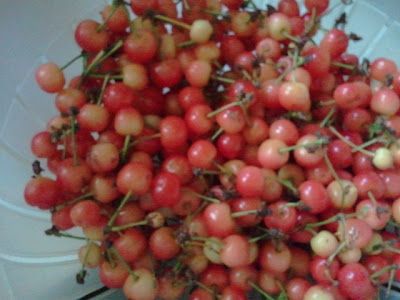 One of the best aspects of owning land is the ability to grow food.  Nothing beats the satisfaction that comes from walking out the back door, picking and eating fresh fruit and veggies.  Plus, with the current controversy over genetically modified crops and the effects of pesticides, I have the added benefit of knowing exactly what goes into the soil (organic compost) and on the plants (water and sunshine).  All it costs is the price of the plants and seeds, and “sweat equity.”

And maybe a few bug bites here and there.

A few weeks ago, a thunderstorm brought down part of one of our cherry trees.  Although all the trees in the orchard have been crowned and pruned, they are still a tad higher than they should be.  So having part of a tree on the ground meant two things:  the fruit was easier to harvest, and I was able to get to it before the birds did!

And when life hands you ripe cherries. . .make cherry tarts! (Although I could have made lemonade, because these cherries are souuurrr!)

Cut butter into flour until crumbly.  Put in a spoonful of cold water at a time until dough forms.  Roll out to about 1/8 of an inch thick and cut into rounds to fit your tart dish.

Put cherries and sugar in a pot and cook until it thickens.

Pour cherry mixture into small tart dish and place dough rounds on top of the dish. Sprinkle a little sugar on the top and bake at 400 for 10 minutes.  We used a small toaster oven.

Mikaela D’Eigh writes about art in all its mediums (paint, music, words, food, and hospitality) and the sometimes humorous side of starting a hobby farm at La Belle Dame de Merci.
Posted by Babette at 3:30 AM