Hey, all--thanks for sticking with me over the summer. It has been a sad time for me, but I've focused on some good stuff...you've heard a little bit about my new passion, tango, and we even went to Argentina (and Uruguay), where I tango'd my little heart out.

The other passion? It's the Nautica NYC Triathlon, which I am swimming, biking and running in this coming Sunday.

I surely must be nuts.

Last year, I did make the jump into the Hudson, but since I was so SO sure I couldn't run, I knew there was no way I'd ever be doing an entire triathlon. Not me, never.

So last August, I started couch to 5K, a.k.a. C25K, a.k.a. (by me at least) Couch Potato to 5K. And it worked. I ran a 5k in November, another one in March (I even led the training for the group of young women I trained with) and in April I ran (albeit slowly) a 10K over the Cooper River Bridge in Charleston, SC. I knew I could go the distance.

Along the way, I continued to swim, I bought a sweet bike and rediscovered how much I really love biking and I continued to run. And now I find myself one day and a few hours away from doing the whole thing and the butterflies are going crazy!

But it has been life changing for me. Is that silly? I am doing something I never ever thought I would do in my life. And that is pretty awesome. I've always said my motto is "How hard can it be?" Now I still say that and add this: nothing is insurmountable.

Neither is the fundraising (ah, of course it was going here!)--I am doing my very best to raise $2,000 this year and I am inching forward. So many of you have been beyond generous in giving--trust me, even the $5 donations count. THEY ALL COUNT. The funds go directly to Amyloidosis Foundation, which is researching ways to fight this terrible disease, the disease that took Paul Hawthorne way too early--from his wife, Amy (who organized this effort) and from his two very young sons.

Paul inspired us all (we are a team of about 40) to do this. We believe in the effort and we've been paid back with new friends, people who are all positive they are making a difference. I see that as one of Paul's legacies, that even his death has brought good people together for a good cause..

So. If you are still reading? Click over to the Paul's Posse Donation Page. Donate in memory of Paul Hawthorne and ask them to notify me (those fields appear after you click the "donation" button.)
Posted by Babette at 4:55 PM 4 comments:

What did you have for dinner this weekend?
We planned a wonderful, big rooftop grill. Our tango teacher (and now our good friend) Daniel was the grill master. He came with his lovely wife, K, and then we had some good friends we are trying to lure into the tango underground  community come. (Check out Passion for Tango if you live near Charlotte.)

Unfortunately, the numbers dwindled quickly as yesterday's dinner approached ...we had way too much meat for the crowd, but we "suffered" through it anyway. There was bruschetta (thank you, MJ! MJ already has come over to the tango side). Lots of Argentine wine (mostly malbec, but not only; all from Mendoza, if I recall correctly). Morcilla, chorizo, flank steak and ribs. Provoleta (melted provolone with oregano. In Argentina, they grill it). Homemade bread, a big green salad with local tomatoes, Marie Speed's very special recipe for potato salad (can't share it without permission, but it is decadent), homemade peach/honey ice cream, strawberry pie. Chocolate cookies. 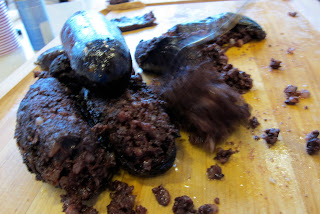 It was fabulous, and Daniel was the champion griller. When a storm blew in (and I mean BLEW in), he retreated only a bit (it was torrential and there was lightning. He had to), but went back out with his big umbrella and grilled in the rain. (Ps. It hasn't rained here in weeks. Of course it would rain when we plan the only grill party we have EVER had upstairs...)... 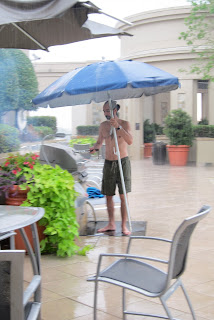 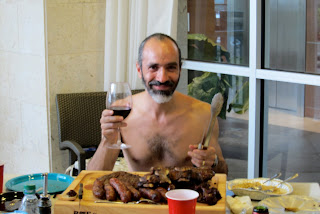 And I think maybe we got some tango recruits.
Posted by Babette at 4:52 PM 1 comment: