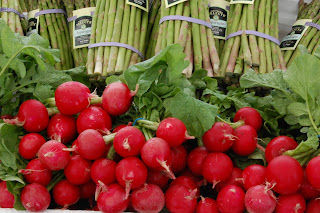 It’s time. It’s time, it’s time. It. Is. Time. Everyone else is blogging, so I am eager to jump on the bandwagon. Here I plan to test new recipes on you. Rant about all things food...and occasionally non-food. I will let you in on some of my daily discrepancies (trust me, I have a lot of those...discrepancies, that is)...but mostly, I hope I will get to share enough fun and thoughtful commentary that you will visit on a regular basis...

Food has simply brought a lot of joy into my life. I grew up in an Italian-American (mostly) family, and we had great times over the table. I still remember being at my Nana’s house and exchanging glances with my sister: we were in the living room and the heated debate over the dinner table (we had escaped immediately after dessert, I am sure) had escalated into a shouting match--but no anger, just passion was there. Growing up meant we became part of that passionate conversation whether it was about food, politics, friends, lovers, relatives and even occasionally, about religion.

Food also took us on travels around the world. My parents loved to travel and they introduced us to other cultures by way of the food, which we often tasted first at home. And by other cultures, I mean anything beyond the city limits of our little Western Pennsylvania town. One of my earliest food memories was of the Armenian bread we would pick up on the way home from church on Sunday mornings: big, round loaves, crusty on the outside and moist and tasty on the inside. This wasn’t sliced bread--it was better than sliced bread in every sense of that saying.

We knew soft pretzels were from Philadelphia. Pittsburgh was great for the Italian food we loved, but also for a host of Eastern European fare--our small town was where I first tasted pierogi, kielbasa, haluski and the nut rolls and lovely poppy seed rolls made by those ladies at the Eastern Orthodox churches.

When we did get to travel? Eating out was an adventure. I know we were usually included in even fancy restaurant outings, which is likely where the seeds of our culinary roots first sprouted. (Of course we experienced the occasional hiccup, such as the trip we took where the only thing my sister ever ordered was a cheeseburger and a root beer...go figure. It was short-lived.)

When I got to college, my major ended up being in anthropology and Spanish: all the better to travel and eat with, right? And what is food about if it not about the study of a culture?

Yes, I served an obligatory bank job after my liberal arts education, but I always had my sights set on culinary school. So after a quick but intensive course at New York Restaurant School, I took the plunge and worked for at least two legendary restaurateurs: Danny Meyer, owner of Union Square Cafe, and Peter Hoffman, owner of Savoy. One thing led to another until the day I said: I need to make some money AND stay home. I was mom to two VERY active boys (Sam and Ian, then 6 and 5, now 19 and 18) and pregnant with my third child, Bryn (now 11 going on 25).

And so I started to write. And to sell my writing, my photos, my recipes...I even got to teach some classes about cooking. I am a bit of a show off, so I admit to absolutely loving leading those classes.

All of which led me to where I am today. I work as a consultant to Florida Table Magazine, where I get to think about food non-stop AND where I’ve gotten to do food styling for one of the most gorgeous magazines to hit the stands in recent years. I develop recipes; I still look for teaching opportunities and do my best to learn about the latest and the greatest in the food world.

Food people are fun. What more can I say?

Posted by Babette at 9:35 AM No comments: