Part of the Blogathon from last month was the guest blog. One of the bloggers I approached was Van Waffle, a freelance writer based in Guelph, Ontario, Canada. He blogs about urban nature at Speed River Journal: www.vanwaffle.com

In May, he had already committed to writing a post for someone else...but in our exchange he suggested we swap posts sometime down the line. Now is the time--he posted a post about edible finds in Bermuda that I wrote..and now I've got this bit of adventure (or misadventure, as he calls it--you know how I love a misadventure in the kitchen!) from him for Babette Feasts.

Stinging nettles are remarkably nutritious, but their bite may be worse than their sting. I learned the hard way. This is a basic foraging lesson: sample every wild plant cautiously before throwing a bunch in any recipe. 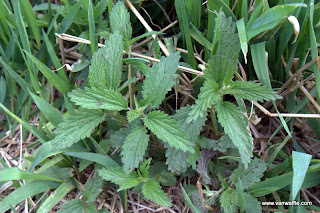 Do not be discouraged from getting to know this unfriendly plant. Urtica dioica is an excellent source of nutrients such as magnesium, calcium and vitamins A, B, C, D and K. It contains more protein than other leafy green vegetables. The plant is distributed widely through Europe, Asia and North America. Handily, it favors inhabited areas. In Guelph, Ontario, where I live, nettles flourish along overgrown banks of the Eramosa and Speed Rivers.


Nettles can be delicious. Supposedly they substitute nicely in any recipe calling for spinach. I like them with butter and a dash of lemon juice. Last month I followed a traditional Italian method for Pesto d’urtica. It was delicious.After that success, I wanted to try an entrée: mushroom nettle lasagna. Onecool afternoon my partner and I returned to the Eramosa River. It drifted past banks dappled with pink and purple flowers of dame’s rocket. There I found what I wanted. 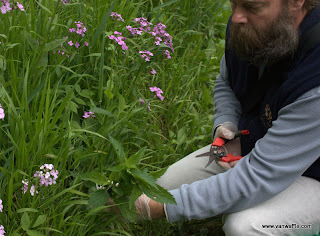 Be careful handling nettles. Stems and undersides of leaves are armed with tiny hairs that inject some noxious brew of acid and histamine. Once stung, you will never forget. It is not dangerous, just painful for a few hours. Some people eat nettles raw to show off their prowess. In case you are not a masochist, I recommend a long-sleeved shirt and pair of surgical gloves or ordinary gardening gloves. Use strong scissors or shears to cut the sturdy stems.

Harvest nettles in spring or early summer. As long as they have only a few leaf pairs, the entire shoot will be tender enough to eat. Mature plants are supposed to be edible, too, but I cannot vouch for their flavour. The stems and lower leaves become tough, so just take the top two or three leaf pairs. Simply steam the shoots. Once limp, they lose their sting and can be safely handled or eaten.

I could hardly wait to make the lasagna. At farmers’ market the same day we bought white and shiitake mushrooms from a Mennonite farm, local goat feta, and mozzarella and ricotta cheese. Rather than steaming the nettles, I added them directly (using gloves) to the tomato sauce along with mushrooms, onions and new garlic and simmered a few minutes before assembling the lasagna. We were salivating by the time it came out of the oven. 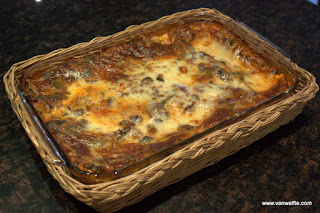 At first bite I almost cried. It was impossibly bitter. This could not be masked with garlic or salt. Each of us sadly choked back one small piece. At least it did not make us sick. I hoped the taste would mellow overnight, but next morning the smell of that lasagna made us both gag. I had to throw it out. I experimented to see whether steaming or boiling the nettles would render them edible, but to no avail.

It is always wise to carefully sample unfamiliar foods, but I had thought the pesto experiment was adequate. Gustatory adventures sometimes end in disappointment; that is the price of discovering something new and wonderful. I recommend tasting steamed nettles before including them in any recipe. Their bitterness might have been caused by an unusually long stretch of dry weather in May. Whatever the reason, I must wait until next year’s crop to try again. Here is the recipe that worked:

Steam the nettles until just wilted, about 4 minutes, then allow to cool slightly. Pulse nettles, pine nuts, cheese and garlic together in a food processor until finely chopped and combined. Add olive oil while blending until desired consistency is reached. Serve with fresh pasta.
Posted by Babette at 5:38 AM No comments: