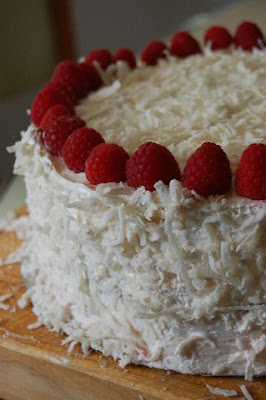 This week's TWD pick is the Perfect Party Cake, which was chosen by Carol of Mix, Mix..Stir, Stir. Glad Carol picked this, because it was a challenge I probably never would have chosen myself.

I divided the work into two days--day one, bake cake. That was the easy part...I cooled them, wrapped them and let them sit on the counter over night. When I unwrapped them, that sticky outer layer came off--that's one thing I learned to do anyway in cooking school. Taking that sticky part off, leaves the nice white cake all by itself. This cake, in particular, has a beautiful tight crumb. Besides that, the jam will soak more easily into the cake without that outside. Day two was for the meringue and assembly.

I heated the whites and sugar, then whipped them with the stand mixer, really pumping up the volume. Meringue is beautiful, isn't it? 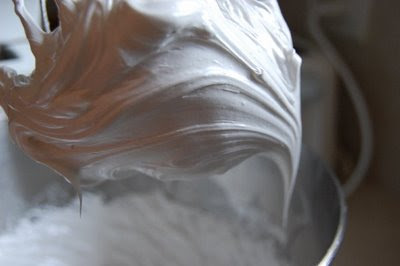 I've said it here before, I'll say it again. these things often are so much easier than they seem...My biggest problem is getting the layers even (that top layer looks a bit ...thinnish, doesn't it?)...I'll work on it. So? To make it again? Work on those layers. I have to go lighter on the jam on that first layer. But besides that? This cake is great. The bit of lemon flavor in the buttercream is so light, so nice... 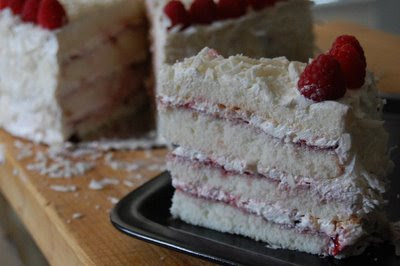 I loved the idea of adding the fresh raspberries...The playing around ideas look REALLY good, too. Whipped cream instead of the buttercream (I'd probably like the flavor better, but I like the idea of doing the recipe as written first...I'll play next time...). Candied lemons between the layers? Okay. I'm all for that...

As always, check out the recipe at Mix Mix, Stir Stir (if it's not up yet, give Carol time; it'll get there.) And head over to TWD to check out all the other blogs. 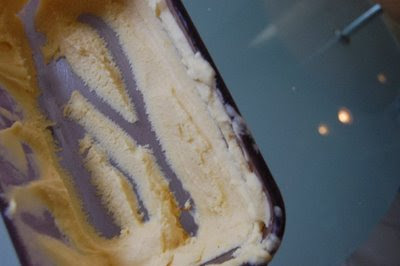 It's not a Tuesday, but I recently had a chance--and a good reason--to make Dorie's Honey Peach Ice Cream (you can find the recipe on Brown Interior, since it was Tommi's TWD pick recently). It is prime PRIME peach season right now, and I happen to still have lots of premium Tupelo honey still from my Apalach trip, so Peaches and Tupelo Honey Ice Cream it was.

I've kept my ice cream freezer ready and waiting in the freezer, so it was no big deal. Peaches get peeled and chopped then briefly cooked with the honey, bringing out tons of flavor. Blend it up (with my handy Kitchenaid stick blender. I've said it before, I'll say it again: Best. Kitchen. Tool. Ever.)...cool. Make a quick custard of egg yolks, sugar, cream and milk. Mix with peaches. Chill all then pour it into the freezer.

The peach flavor in this is just incredible, and the honey comes through, too...what complementary flavors those two are...

As for the photo? I couldn't snap quickly enough. This is what was left when I finally managed to break out the camera. 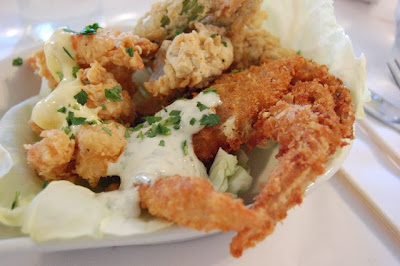 Sure, we've all given it up, but every now and again, there is nothing, NOTHING, as good as a fish fry. Here's Fried Heaven from Cafe Momi in Apalach (at The Gibson Inn), a starter of fried oysters, fried soft-shell crab and fried shrimp. The chef does an especially nice job, and it was truly a decadent way to start the evening.
Posted by Babette at 5:51 PM 3 comments:

For your viewing pleasure... I've had one hectic month. I think I'm gone this Tuesday and next, then home for a good long time, I hope. I've been globe hopping (okay. U.S. hopping...) and only home for a few days in between a trip to Apalachicola, FL and St. George's Island (if you have never been there, make plans to see this very unspoiled, spectacularly beautiful piece of coastal Florida where Apalachicola oysters come from. See me down more than my fair share of Apalachicola Oysters at the Florida Seafood Festival here on a VISITFLORIDA.com video), a trip to KY, a trip to NC with a 24-hour whirlwind to and from trip to CT (still to come)...THEN a 10-hour drive home to Florida, where I'll get to spend some down time with my sister and her family...but at least I'll be staying put for a while..and hopefully cooking and baking again.

In the meantime, I'll be posting a few images from my trip to Apalach (that's what the locals call it. That "-icola" being so tiresome and all) and, if I can find a camera cable (drat, I hate when I travel without it), from various and sundry other stops along the way.

Today's image? That was dinner. Wish I could say "we" caught it, but I was just on the boat that took a few of us out into the Gulf of Mexico, where one of us (hi, Jim!) caught two keeper groupers. Capt. Kamen (on the Pressure Drop out of Carrabelle, FL) fileted it, and we took it to Pirates Restaurant that night, where they fried it up (perfectly, I might add), and we enjoyed a few grouper fingers as appetizers. I don't think I've ever tasted better.
Posted by Babette at 8:45 AM No comments: