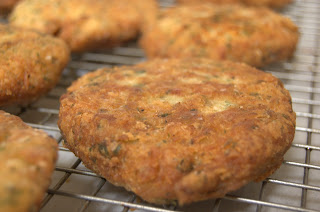 One of my very worst memories of meatless Fridays growing up is the fishcakes we were served. It was always a very bad, sad day on those Fridays (we would have eaten fish sticks every Friday night. This was not during the years of fresh seafood in the greater U.S. interior. Trust me.). I remember a textural mush, a certain fishiness and filler--whatever it might have been.

Well, imagine being reintroduced to fishcakes as an adult. Let's just say I did not even bother trying one immediately. But there they were, showing up at every turn. So I broke down and bought some last year for Easter (an Easter tradition)...and they were okay. I homemade the traditional hot cross buns last year. They were just okay, too.

This year, I reversed the order. I homemade the fishcakes and bought the buns. Stellar decision. I will leave the baking of the buns to the pros in the future and will always make a batch of fishcakes.

This uses salt cod, which, in spite of my Italian heritage, I'd never prepared. I read one article about a well-known chef who did not divulge his recipe, just named a few ingredients and a ratio: 2 to 1, fish to potato. Well, that was enough for me.

I rocked these fishcakes. I think we ate them for lunch and for dinner...I made two types of tartar sauce, one plain and one with curry powder...oh, and it was unusual tartar sauce, because I used Branston Pickle instead of relish, which I didn't have...

Try them, you'll like them. These won't erase the childhood fishcake scars, but they'll go a long way towards blotting those taste memories out. 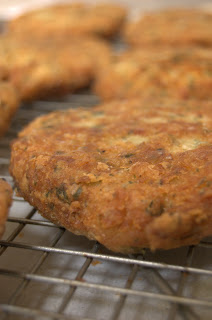 1. Soak the salt cod for at least 10 hours, the water every couple of hours. Place salt cod in stock pot with onion. Cover with fresh water, bring to boil and cook about 20 minutes.
2. While salt cod cooks, cut potatoes into small pieces. Cover with water, add salt to water, bring to boil, reduce to simmer and cook until soft, about 20 minutes.
3. Drain cod and onion. Drain potatoes. Let potatoes cool until you can hold them, then peel the skins and mash potatoes with a hand masher.
3. Place the fish and onion into bowl. Break fish into pieces. You will have about 2 cups fish. Add 1 cup mashed potatoes. Add parsley, herbs, salt and pepper and egg to the bowl and mix well.
4. Heat oil in cast-iron skillet to about 365F. While oil heats, shape mixture into fish cakes about 2 1/2 inches wide. Dredge each cake in seasoned flour (flour mixed with salt, pepper and paprika) and gently shake to remove all excess. Heat oven to 225F and place rack over sheet pan in oven.
5. When oil is hot, place about 4 fishcakes gently into oil. When golden brown on bottom, gently and carefully turn the fishcakes and cook until golden on second side. Drain fishcakes on paper towels then place onto rack in warm oven.
6. Repeat with remaining fishcakes. You will have about 12 fishcakes.

These reheat very nicely. Place on sheet tray in 350F oven and heat until piping hot.
Posted by Unknown at 4:25 PM No comments: 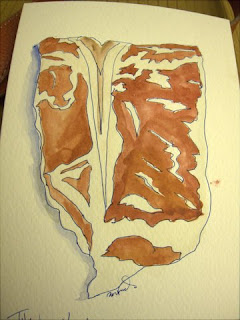 I was possessed recently--I hand-painted 8 thank-you notes to some sources (I spoke to them about "specialty meats" for a story)...I was proud of these little masterpieces.

As ever, I continue to paint food best...landscapes? Meh.

Posted by Unknown at 7:11 AM No comments: