I had an awesome weekend. I cannot describe the energy and enthusiasm of the entire Paul's Posse and especially, for me, of team Go Paul's Posse, Go!--Dakila, his wife Elke and me. (Dakila's blog, Training Wheels 2.0,  follows his training and prep for the race--he did a great job of posting his progress.) I loved them both instantly--and as someone at the team dinner on Sat. Night put it: I don't know everyone in Paul's Posse, but because you ARE part of Paul's Posse? I know I like you already.

That was how I felt about Dakila and Elke, who both were good friends of Paul and Amy long before amyloidosis darkened all of our worlds and took Paul from us. We did swap some Paul stories, which was so refreshing--we laughed a lot. Many of us were moved to tears when AJ, who is living with amyloidosis and in remission, got up to speak at the team dinner. Once diagnosed, he went online (where else?!) to research this rare disease. He found and read Amy's blog--start to finish, I would guess--and asked Amy if he could join the tri. It was post-registration, but Amy told him he would probably find a spot on a relay. He did. Then one of the relay dropped out and AJ said he'd do two legs. Then the other member of the relay dropped out and AJ finished the entire tri as an individual. An individual in remission from amyloidosis.

We all just felt we were doing something important here on this earth...and we all felt we got so much out of it.

Here we are, all "body marked." That's me on the left, then Dakila and Elke. 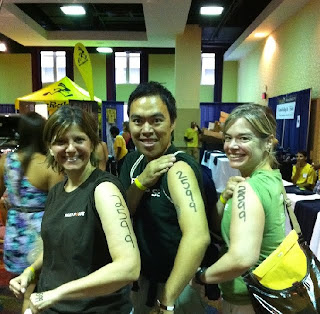 What's the Hudson River like? Well. I have to say, it was cleaner than I anticipated in terms of trash: I saw none as I swam. Which is not saying much...you couldn't exactly SEE anything...just a glow of light. I only swallowed one mouthful of the Hudson (saltier than I expected).... After an incredible crunch and mashing and churning of limbs at the start (I finally pulled up and floated a bit to let the crowd move on), and after the rush of adrenaline that made me think I needed to breathe on every stroke, I calmed down and remembered the long, stretching strokes that took me through 1500m at the pool. If I'm honest, I felt stronger as the swim progressed once I settled down--I passed plenty of people and came in behind plenty of others. I was not going for speed, I was going for Paul.

I do have one issue with the race though: WHAT IS UP WITH THE 700 YARD "RUN" TO THE TRANSITION ZONE???? BAREFOOT, NO FRIGGIN LESS.

Um. Well, that may be in the race literature SOMEWHERE, but I sure missed it...um, until about 4 days before the race. Yes, folks, I swam 1500m and then had to exit (oh, you get pulled from the water by gorgeous men--they must be beach lifeguards or something...it was nothing to swim into their arms...in fact, I believe I may have raced to the finish and then slowed down a bit there, if only to linger...) onto a 700 yard run in my bare feet.

Did I tell you that one of the reasons I didn't do the whole thing is that I just. Can't. Run. So I tried. I padded along, knowing Dakila was anxiously awaiting me on his bike--I thought: You can't walk, Barb! You've got two other teammates counting on your efforts...

My feet still sting a little. If I do it again next year, part of the training effort will be a once a week, barefoot 700 yard run.

Dakila took off as soon as I handed off the timing chip. He had a great ride--so great that at the end, he was thinking about asking Elke if he could do the run, too.

He knew she'd be having none of that.

Elke took off in incredible heat, posted an awesome time, and we met her at the finish line with most of the 40+ member of the Posse--I busted through the security to get us relayers some bananas, SOME WATER, an ice cold towel--(hey, NYC Nautica Triathlon! Next year? Make sure security knows the relay racers can come in...we needed food/water/ice too...) Several of us hung out for a final photo together. I can't wait to see that shot.

Just found it--you can see it here. Thank you to Debra Rothenberg, who was a fellow photographer with Paul. Ha. Even better, I got to download it and use it here... 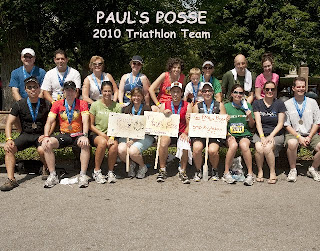 Post-race, three of the charity teams were invited to Blondie's on 79th street for beer, food, raffles and fun, courtesy Korff Enterprises, the owners/organizers of the race. Okay, here's one line in honor of food: I ate a full-on burger and fries and drank a couple of GREAT Bass Ales with impunity. We all had EARNED those calories.

We swam with other relay teams and the CNN team. In this photo, the relayers are in the hot pink caps--I swear to you, I think I am the swimmer to the right of the guy looking back towards the start (about halfway up on the left side of the photo).

Soon Babette Feasts will be back to food. But this was such a wild and new experience, I had to share.

But can I tell you? I am seriously considering doing the whole thing next year. Do you think I can run 10K??? Not sure. But I can try!
Posted by Babette at 8:43 PM 5 comments:

Hi, All--well, after the blogathon, I've fallen off the wagon, but July is an incredible and incredibly busy month for me...The big event is my Hudson River swim as part of a relay team participating in the Nautica NYC Triathlon--we are raising money for Amyloidosis research in memory of Paul Hawthorne, my cousin's husband, who I blogged about here.

Some of you have donated to the cause, and in case I've missed thanking you, here's my open letter to all. I will take up blogging and cooking next week!

I get into the Hudson at 6.14 a.m. on Sunday--think of me in your dreams. I may have a cheering delegation in the form of my friend Kumiko, a friend from my time at Florida Table. She's moved to NYC and has a little apartment quite close to the start of the race, so sleeping there Sat. night is an enormous help. (I am just not certain she'll get up so early to see me swim.)

I will be done with my leg by 7 a.m. and my teammate Dakila has offered to have a cold beer waiting for me before he gets on his bike to speed off to his 30 miles (30k? I can't remember) of the relay. His wife, Elke, will finish the race with a 10k run. Better her than me, that is all I have to say about that.

Pre-race, Amy's parents are hosting a party at Da Andrea (carbo load? I may be too nervous to eat). Post race we will be celebrating at Blondies, where the race organizers are hosting the teams that raced for charity ("race" being a rather nebulous term in our case). Friday night there is the Jamaica underwear run, but please. It's enough to ask me to be in NYC in a wetsuit. Nobody would benefit from me racing in my undies in Central Park. Nobody.

So thank you all so much for this--Every little bit has helped. Again, you have all been enormously generous. The comment below comes from the doctor who treated Paul; this was part of a recent press release. Thought you would like to read it:

....this quote that Paul's doctor, Raymond Comenzo, recently offered to help explain the importance of our team's cause:
"At the International Amyloidosis Workshop in Rome in April 2010, there were 15 young doctors and scientists from around the world presenting their research whose attendance at the workshop was supported by grants from the Amyloidosis Foundation. The Foundation depends on the support of donors and teams like Paul’s Posse, a New York City triathlon team raising money to honor Paul Hawthorne, a 41 year-old husband, father, professional photographer and veteran who died while being treated for cardiac amyloidosis. Paul’s wife Amy is leading the Posse’s efforts. The funds raised by the Posse in homage to Paul will enable the Amyloidosis Foundation to continue its support of research aimed at advancing our knowledge and treatment of amyloidosis. We are grateful for Paul’s Posse and for Amy’s leadership and wish the Posse Godspeed and safety in every leg of the triathlon."

Perfect Intersection of Food and Science and Art

Oh, this rings all my bells. A scientist took photographs (not the kind I take!) of cocktails...I could look at these forever.

What Booze Looks Like Under a Microscope
Posted by Babette at 1:12 PM 2 comments: