Lobster Eggs Benedict, Nevis, a photo by BabetteFeasts on Flickr.
Online friend/colleague/writer/photographer Fred Minnick posted a photo of Eggs Benedict, which reminded me of one of MY favorite versions, shared with a lot of fun people on Nevis.


I do believe Eggs Benedict, lobster or not, are a pretty perfect way to enjoy a Sunday.
Posted by Babette at 2:00 PM 3 comments:

Look at Me Now! BHG Looks at Babette Feasts 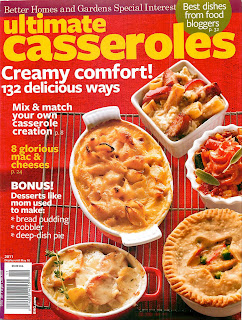 It's taken me way too long to post about this (I'd say I'm shy, but you all know better)...

A while back Better Homes and Gardens called me (ME!) to chat about casseroles--you know, the "Old-fashioned" word for what we all now call one-dish meals. I ended up in a story called "Best Dishes from Food Bloggers" WITH DORIE GREENSPAN. I am so honored, excited, etc.

We chatted about a ton of dishes (I had just made Marcella Hazan's lasagne), they quoted me, they adapted a recipe for tuna noodle casserole (trust me, it's good. It hands down beat the Friday fish cakes that used to appear on our table during my childhood. Those? Those bring back nightmares. And no, I didn't grow up anywhere near fresh fish. Who knew I'd love the real thing? I digress.) and then it shows up in this beautiful, glossy, incredibly styled special issue they titled Ultimate Casseroles. 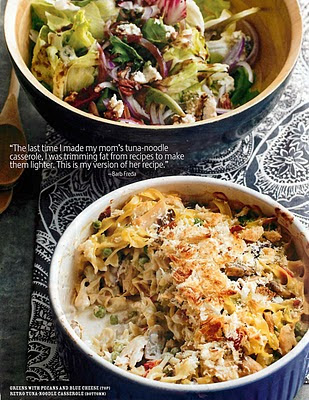 I give you the cover and the photo here--hope you'll go looking for it (the cover says "display until May 10")... 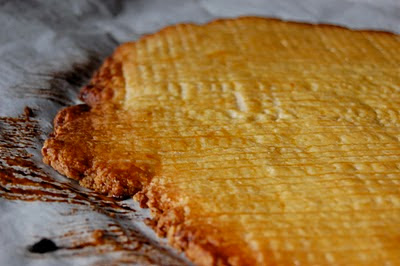 There's not much to say here because name says it all for me...shortbread with a touch of salt..right up my alley, simple, pure, delicious..I used some nice sea salt I had on hand, but it was fine; I am so going to try this again with flakes of sel gris....you know. I just must suffer through another recipe of one of my favorite things: shortbread. Ah, the rigors of recipe testing....As a treat, this could not be much easier. Mix. Chill. Pat into large "rectangle." Don't get crazy about it being perfect..bake and serve whole, let guests break off their own pieces...mmm. Happy.

I've only posted two photos here, but trust me. I took a ridiculous number of them...because I'm in love with food shortbread...add salt and I'm over the moon (you know: the really big one that graced our skies last night! How cool was that?)....
Be sure to check out other results over at French Fridays with Dorie. 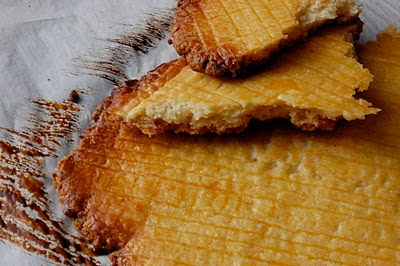 Things I Don't Want to be Without. A few weeks ago, I tweeted that the earth had shifted on its axis: I was out of fresh garlic. Then I found myself out of vanilla. Then I actually ran out of flour. Then I was out of peppercorns for the grinder. Oof, and I was out of milk from my farmer and, horror, of COFFEE.

So I got to thinking. There are some things that should always be in my kitchen. I should just put them on the permanent list. The flour? Well, that got low after a pasta making class and I hadn't replenished. And the vanilla was low after some baking. Those aren't essentials. But I DO have a list of essentials, things that I want to be available always as I create. So here in no particular order, are the things I will just buy. Always. Because chances are very good that they have been used up within the week.

3 Fresh Lemons
2 limes
1 Head of garlic
Red wine (no, I won't tell you how many bottles!)
1 bunch parsley (until mine in my herb garden grows enough to cut and use)
Cilantro (ditto)
Basil (ditto)
Onions
Lettuce (lots of it so I can eat salads as big as my head)
Farmer's milk and cream and butter
Farmer's eggs
Red Dirt Ranch chicken
Grateful Grower's Pork
Beef from River Taw Farms (I visited and bought 20 lbs, so I'm good there for a while)
Potatoes
Bacon (hopefully from Grateful Growers!)


With these in the fridge, I always have dinner. The chicken gets roasted, then made into some dish (last week, Dorie's chicken b'stilla) and then made into yet another dish with any leftover (last week: chicken and dumplings). From Grateful growers, I've had ribs, sausage, ground pork, brats--I still have to check out pork loin and pork chops. Potatoes get mashed, "gratin'd" (real word is gratineed, I think), sliced into pommes anna, baked, you name it. I could make a quiche with the eggs, the bacon, the onions....

Anatomy of a Pasta Dish 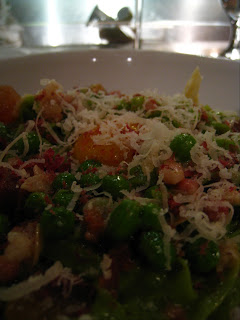 Last night, I finally FINALLY got to Rooster's Wood-Fired Kitchen in Charlotte. I say it that way because G had eaten there eons ago, ordering diver scallops and was miffed when he only got two...for a lot of money.

But that was eons ago, like I said. We've visited for a drink or two since then, tasted a few nibbles and then? Then Groupon came, and I was determined to get G back into the place. For dinner.

We had a reservation but went early hoping (very much against hope) that we could get a table anyway. No dice. But there were two quite comfy stools looking into the kitchen, right by the pasta station.

When the hostess read the specials, she had me right away with this pasta dish. House-made spinach noodles tossed with house-made (I think) guanciale, peas, some lemon, a grating of house-made SOMETHING (more on that later) and a yolk cracked right into it.

It was fascinating to be so close to the kitchen action again, after all these years away. Sure, I wasn't IN the kitchen, but I loved hearing the orders called out, the pasta guy acknowledge it, orders get fired, we saw orders get tossed (too late? too early? Too cooked? Who knew?)...I told G how it was all working (ooh, and bragged: I was an expediter extraordinaire) and then I saw two bowls go out on the counter next to the pasta station.

"That's us," I said to G, nudging him. We watched in silence (as the enormous swirl of sound was all around us) as the pasta guy dropped our noodles. Drained them, tossed them with the magic in the pan and divide them into the two plates. Then he shaped a little nest in each mound of hot hot pasta, cracked one egg into his hand, letting the white fall away (I do it just like that!!) and settle it into one of those nests...crack another egg the same way...then he picked up a hard nugget of more smokey meat and grated it over all.

The plates reached us, my mouth watering already. I managed to wait long enough for a scraping of cheese and then? Oh. My. This was the best bowl of past I've had in eons. Maybe ever.

We caught the eye of the pasta chef--thumbs up--he got a little smile all to himself, and he looked pleased we were pleased. I know from experience that it's nice to know the people who are enjoying the fruits of our labors in those hot kitchens.

I managed to save half (mm. Lunch today)...but I had to catch him once more to ask about what he'd grated onto the pasta...turns out it was another house-made sausage, one of his own making, using ostrich and bresaola (I think)...Of course, me? I'm thinking, "Drat. I can't duplicate it." But that's okay. Guess sometimes that's the better way. 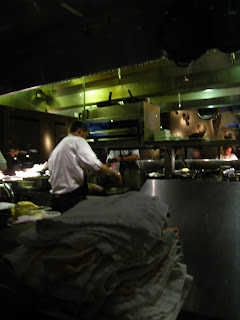