Every now and then, a little bonus shows up in my email--that's how I felt when a Phillips Saeco rep got in touch with me out of the blue to ask if I wanted to try the new line of espresso makers they have.

Let me get full disclosure out. I'm relatively attached to the very old (at least 10 years old, maybe older) Krups espresso/steamer I've had on my kitchen counter for years. I love it so much that I travel with it when I can. It's small, simple and gives me great coffee. I'm loyal.

Remember that paragraph. I will revisit it.

Where was I? Ah, Phillips. Um, well, YES, of course I'd love a shot at trying a few shots of espresso from this new line of machines that would make my morning coffee easier than it already was. So I said yes, send me a machine.

What I didn't let the rep know was that I planned on traveling with the machine. And that machine was going to be put through its paces, because I was taking it to our family reunion--17 people, almost every one of them a coffee drinker, and the tea drinkers? Well, they would decide if the hot water dispensed make their cups of tea worthy.

I unpacked the machine the minute we arrived at our destination.


Oooh, pretty. The machine is sleek, the lines slick. The would look nice in any kitchen and its footprint is pretty small. I'd find room for it in a flash. 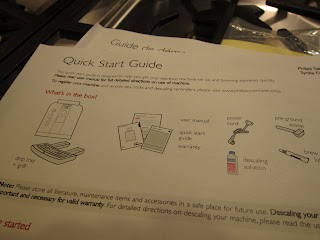 The quick start guide was pretty straightforward, although I did have to read the manual to understand what a flashing light meant, how I could get my double shot (hit it twice, silly), the right way to clean the steamer wand and what the little warning icons meant (no beans, bin full of spent coffee, out of water--they were simple)...


I chose a Green Mountain coffee bean to make the first batch (I did read enough to know to let a couple of cups brew just for discarding before I began). I selected the strongest setting, hit a button and let the coffee brew.

The espresso came out strong and pretty, with just the right crema foam, that milk-chocolately looking foam that tops a really good espresso. I loved that the spout could be lowered and raised to accommodate different height cups.

Next up? The steamed milk challenge. This is where so many machines fall short for me. They don't foam it well enough and they never ever heat it enough for me...

Not the case here. I was able to get the milk steaming hot with a great head of foam. That first morning, I was Babette the Capuccino mistress..."Double shot caps for everyone!"
Whether they liked it or not.
They liked it.


The button that did not get a ton of use was the button for an american-style cup of coffee, although it got good reviews when it was used.

We used both whole beans and grounds throughout the week, but the beans won us over. 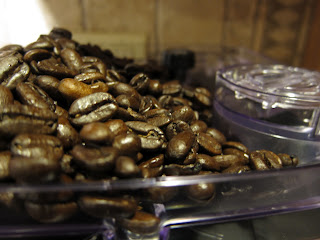 Once rocking and rolling, it was easy to make the coffees, and we went through a lot of coffee that week. As the primary barista, I must admit to liking not having to empty the grounds every cup, not having to fill water every time I turned around, and then, when I broke out the directions again, I loved that I could hit the "make" button twice and get a double shot without hanging out to make that second shot. I love that it grinds beans for each and every shot.

Cleanup is simple--I ended up keeping a pitcher of water near the machine to clean the steamer (we did clog it once, when I was NOT using the pitcher, but just wiping it down and blasting a shot of steam...that wasn't good enough), and that was simple..

I do wish I had stationed the machine closer to a sink to empty the drip tray, which seemed to fill up more quickly than expected, but that job was simple.

We had one tea drinker who was pleased with the hot water she got from the machine--she gave it thumbs up for being hot enough, and that was good enough for me.

The final critique? We enjoyed the machine. One user wishes the spout, which does raise and lower, would raise just a bit higher so he could fit a travel mug under it. That same user thought that for the price, he would want to be able to connect the machine to a water source (although then we are talking plumbing, and I myself prefer to avoid plumbing.

The real letdown was returning to my beloved, simple Krups, the one I traveled with when I could. After a week of Saeco's espressos, I wanted to quickly do a comparison, and my Krups didn't live up to its reputation. My coffee tasted burnt and weak compared to the Saeco, which was definitely not what I was expecting, and it has stood idle on my counter for a few weeks now.

Would I pay the price Phillips is asking for this machine? It's listed on Amazon for $949, and that sure seems pricey to me. But having done one kitchen in the past, knowing how I love my coffee, I think I might, might budget for a real espresso machine (at which point, I'd probably shell out for one that did get that water supply attachment). And because I'm a slave to stainless steel, I'd probably be eyeing the stainless steel version of this machine, which looks more substantial than the black (plastic) one feels at only a few hundred dollars more. Yep, it's an indulgence, but if I have it for at least the next ten years the way I've had my basic machine, drinking at least a cup of espresso/cappucino daily, I pretty much see me justifying that purchase for a new kitchen. (That I don't have, btw.)

This is a sponsored post; Phillips Saeco gave me the machine for use and review, and I warned them I'd be honest. I was pulling for my Krups to measure up, but maybe its decade of use has finally caught up to it. Unfortunately, when all was said and done, I subsequently passed the machine on to another user. I travel too much and it just couldn't come with me. I am sure someone, somewhere, is enjoying the coffee the machine must be making.