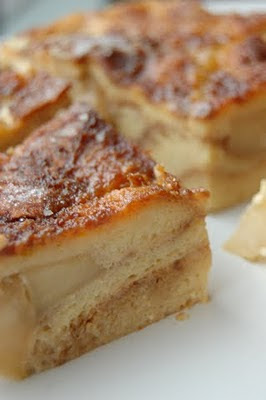 I know. But I was booted from TWD (rightly so!) when I couldn't keep up my Tuesday end of the Bargain...and Corbin Evans so kindly agreed to guest post for me on Tuesday, the official Blogathon share day, there was no way I was booting THAT post...So if my TWD is really TWD on T(hursday), it's okay...it's onofficial...(I could have gone on Monday before all the others, but that just didn't seem right, official or not...I still love those bloggers!!)

So. Does the family like bread pudding? Don't know, don't care. I'm making it...Oh, okay, here's what I know...Mr. Babette THINKS he doesn't like it, but that's because he grew up eating something called bread and butter pudding--toss some stale bread with some butter (it was likely margarine) and sugar, a couple of raisins and call it dessert. Blech, too!

But real bread pudding? I KNOW he liked Laura's bread pudding at Union Square Cafe when I worked there and Laura was pastry chef. She used day-old Tomcat Bakery bread...she added enough custard that the bread cubes would float and there would be a silken custardy layer beneath those bread cubes, shot through with custard themselves, a bit crunchy and crusty on top with sugar. Sigh. What a good memory.

So they will like this. You will all be happy to know I didn't screw one thing up--didn't miss out any ingredients, didn't use seven tablespoons of butter when Dorie called for nine...no, indeed, this was pretty simple (except: No brioche at the local Harris Teeter??? Say WHAT???)...I used nice bread, slathered it up with most delicious apple butter (a very funny discussion about what is apple butter took place on TWD--funny to ME because I grew up with it...just think how many people learned about lovely apple butter because of this TWD recipe!) And in the aisles, my hand reached for the peach butter, too--but my fridge is laden...over laden, I'd say...let's work our way through the apple butter (and orange marmalade and strawberry jam and ginger jam) and then we can try the pêche butter. It's not going anywhere.

For me, the caramelized apples make this--they give the bread pudding a bit of extra oomph and texture (I love me some texture in desserts...it's why I don't like pudding or mousse...no texture but....smooooth...) and the caramelized notes come through...I even brought the milk/cream to a near boil in the skillet I used to caramelize the apples so I could soak up every ounce of caramel-y flavor.
I sprinkled sugar on top (going for more texture and thinking of Laura's creation--wish I'd had turbinado.. ...this house..NO ONE ever tells me when they've finished something...they just put the carton back empty except for a few crystals (or drops of milk) and say: Well it wasn't REALLY done...but I digress)..

This is so nice. It's pretty, with its mosaic of cut apple, apple butter slathered bread slices and custard...But of course, it is fabulous, too--I think boiling the milk in that skillet really made a difference because you really DO get incredible notes of caramel in each bite.

I made Ian compare it to the apple bread pudding he ate out on Sunday night at Mac's Speed Shop...there, the dessert was covered with an admittedly FABULOUS caramel sauce...which I may just add to this because I can. Decadence, thy name is Babette...Anyway. Ian hasn't weighed in yet, but I am sure I'm at the top...right, Ian? Right? (Update: Ian HAS weighed in. He likes mine better--he loves the texture the apples bring.)

Bread pudding? You either love it or hate, I think, but if you love it...love this...I could see this as a lovely fall dessert, especially...someone suggested whiskey sauce, too...only the Kentucky girl in me would have to go with bourbon...Nice...very nice...
Posted by Babette at 12:01 AM

It looks most yum! I lace mine liberally with Calvados.. :)

Two Hands and a Roadmap said...

And here I am with a day off work tomorrow. I wonder if I can pull this off.