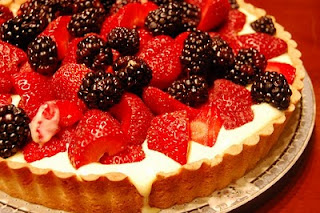 Truth: My Tuesdays with Dorie should just be retitled Babette's Big Bad Adventures in Baking, because if there is a way to screw things Up? Oh, I can, dear readers. I can.

Case in point, this week's tart. Day 1. Made pastry cream and did a pheNOmenal job. If I do say so myself. Into the fridge with it.

Day 2, Mother's Day (wouldn't this tart be delightful as dessert for Mother's Day dinner, thought Babette to herself...). Make crust. I know Dorie's crust. We've met before. We've  had good times before, so I was ready-bring it. Pulsed the flour, sugar, salt. Added butter. Man, it was NOT sticking together, not even a little bit, but I was trying SO HARD to be gentle..I remember to press gently so I don't lose that very crumbly, very short quality of this crust...It was a struggle, frankly, but I persevered, pressing harder than I thought I should, musing to myself about why doesn't Dorie weigh her flour...surely I measured out too much flour, that HAD to be the reason it wasn't sticking together...I re-read the recipe, know I measured right, sighed and slid the tart crust into the freezer. Turned the oven on...and started to clean up, reaching first for the very expensive butter I'd decided to use for this recipe..

But wait. Why is this chunk of butter unwrapped? It looks SUSPICIOUSLY LIKE THE NINE TABLESPOONS OF BUTTER I SO CAREFULLY MEASURED OUT USING THE WRAPPER MARKS...I look to the crumble of wrapper on the counter, the one from the butter I'd chopped up and added...the one with only SEVEN TABLESPOONS OF BUTTER LEFT AFTER I MEASURED OUT THE NINE. The chunk of butter still on the counter? That? THAT was the nine...

I froze the crust for 30 minutes...baked it with foil on top, shiny side down (really? Does that really make a difference?) and then baked it some more...Like Dorie, I like a fully baked crust to be FULLY BAKED...so I was going for golden...and got it...

I filled the shell with pastry cream...you may think I was a bit generous, but that stuff is GOOD. Then I topped it with a BUNCH of the fresh berries I got from the Farmers' Market on Saturday and some big old fat blackberries...I was in too much of a rush to drizzle on the additional red currant jam.

This was a treat to eat...even without the extra two tablespoons butter, the crust is a lovely shortbread base for the tart...(it was, perhaps, a bit firmer than it should have been since I really DID have to press it hard to get it to stick together, what with it missing that extra butter and all)..

I'd love to make this in individual tart pans in the future...so pretty. I WILL remember the extra butter in the future...but if I can offer any advice? Just make this. My daughter decided it was the best berry tart she'd ever tried...high praise indeed. 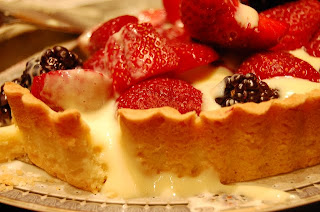 Head over to Tuesdays with Dorie to check out the other versions of this tart and read the recipe (posted with Dorie's permission) over at Cooking with Cristine, who chose this week's TWD recipe
Posted by Babette at 12:01 AM

Thanks for baking with me! Your tart looks great!

Ciao ! Lovely lovely tart ! I used less butter because italian butter is more fan than america's and it worked with 6 tbs !!

thanks for stopping by Cristine, Natalia...Natalia, I used expensive Irish butter--so maybe I inadvertently helped myself...It tasted fabulous, but I do think it could have been a bit more melt-in-the-mouth crumbly...

You are so funny! And also such a good writer that you had me worried at the top of the post that your tart was going to be a disaster. But no -- it looked great, even minus the little bit of missing butter. And that it tasted great was the best part of the story.

BTW, I just read your January post about Susan Loomis's chicken. Funny about your kids.

Babs, you always crack me up! I'll bet you said a ruuuude word when you saw the butter on the counter...hehehe...

But your tart looks totally superb, and your pastry cream looks lush, and your berries...oh...they just look to die for! Your daughter is on a roll, best berry tart ever AND her favourite mushroom soup, all in the one week! :)

I'm loving the blogathon, and getting to read a little bit of what Babette is feasting on every day!

Looks great to me! I think you can get by with less butter anyway. I loved this tart and will make it again with the mixed berries.

looks great even with the missing butter ;)