Repost: Rules to Break in the Kitchen..

Since I've written this, I don't actually wash that black cast-iron pan so often. I add oil, heat it on high, which cooks any bits of food off. Then I add just enough kosher salt to scrub the surface, using a wooden paddle to really rub where I need to...Then I let it cool and dump the oil/salt mixture into the trash. These days, I must admit I don't wash it that often...but there ARE still times I do...but the hot oil/salt trick does such a great job--try it. 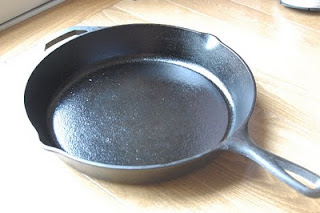 There are some absolutes in a professional kitchen, some from home kitchens--things we do just because...well, we do... And some of them are great...and some simply don't work for me. So here you go...things that might make my first chef (Hi,Peter Hoffman, owner of Savoy in Tribeca!!) or my mom or my nana shudder...

So while I may not scrub with Dawn and a scrub brush, water always hits the pan after use. Mind you, so does a coating of oil and then I pop it into a still warm oven. It is pretty damn nonstick at this point and I love it. (Buy Lodge: Made in America....) But really? Wash it.

2. While we are on the subject of washing, I give my mushrooms a rinse. I was taught to patiently wipe the shrooms with a damp paper towel...washing them would make them act like sponges, I was told. Well...I'm not that patient. Now I toss them into a colander and give 'em a quick shower, shaking off excess water before popping them into a hot pan. Me? I don't think they suffer.

3. I cook ALMOST exclusively with extra virgin olive oil. I'm told it's a waste of money, but...hmm. I like the flavor...(sometimes, I know, I really DO want the non-flavor of vegetable oil and that is in the house..)...and it's what is at the side of the stove. And I like the flavor, did I say that already?

4. I don't buy expensive nonstick pans. Don't put your money into nonstick pans if that coating is on the inside of a $100+ pan. Heck, don't do it if the pan is $30+...I haven't come across a nonstick surface that lasts forever--not the way I cook, at least. And no, I don't use metal, I wash them by hand...but ultimately, I toss them and buy a new set of nonstick pans...once a year. And I don't spend a lot (check out Ikea)...(or do what I  plan to do and replace them all with cast iron eventually...cast iron that I WASH...)

6. I keep butter and some eggs always at room temperature. I have never used margarine, only butter--and I do not like rock hard butter...not at home, not in a restaurant (it's always a mark against a place if they bring be bread and rock hard butter...) Now this doesn't mean there's a pound of butter on the counter...At most, there's one stick in a covered glass butter dish. I guess if you don't have A/C, this wouldn't work in the height of summer, but other than that? Always there. Same goes for some eggs. I go through eggs relatively quickly, so this isn't a problem for me (although if my mom visits, we play the she-puts-the-eggs-into-the-fridge, I-take-them-out-of-the-fridge dance...until I snap and say: LEAVE THEM ON THE COUNTER. IT'S WHERE I WANT THEM..) Again, I used them up quickly and if I'm baking, I want eggs at room temperature...So if half a dozen are on the counter for a few days? No. Harm. (Again, YMMV if you live in a hot climate with no A/C)....

Bonus Item: SUBSTITUTE, PEOPLE, SUBSTITUTE!!! I have experienced cook friends and family call me now and then and ask: Can I substitute red onions for yellow? Can I use white wine if I don't have sherry? Can I use sherry if I don't have white wine? Chicken thighs instead of breast? Will bourbon work for whiskey? YES, OF COURSE YOU CAN AND OF COURSE IT WILL.
Again, these are some experienced cooks asking. No, of course sherry doesn't taste like white wine. (But onions DO taste like onions)--I can't begin to tell you the recipes I make...when I at times only have half the ingredients. Be bold. You really can't ruin it by subbing one veg for another or one wine for another. (Okay, so there's the time DH wanted a whiskey sour and subbed Scotch for the whiskey? That? THAT didn't work...) (Caveat: The same doesn't hold true in baking, as I bear witness to time and again in my rough attempts at baking...Baking is for precision...cooking is not!)
Posted by Babette at 10:17 AM