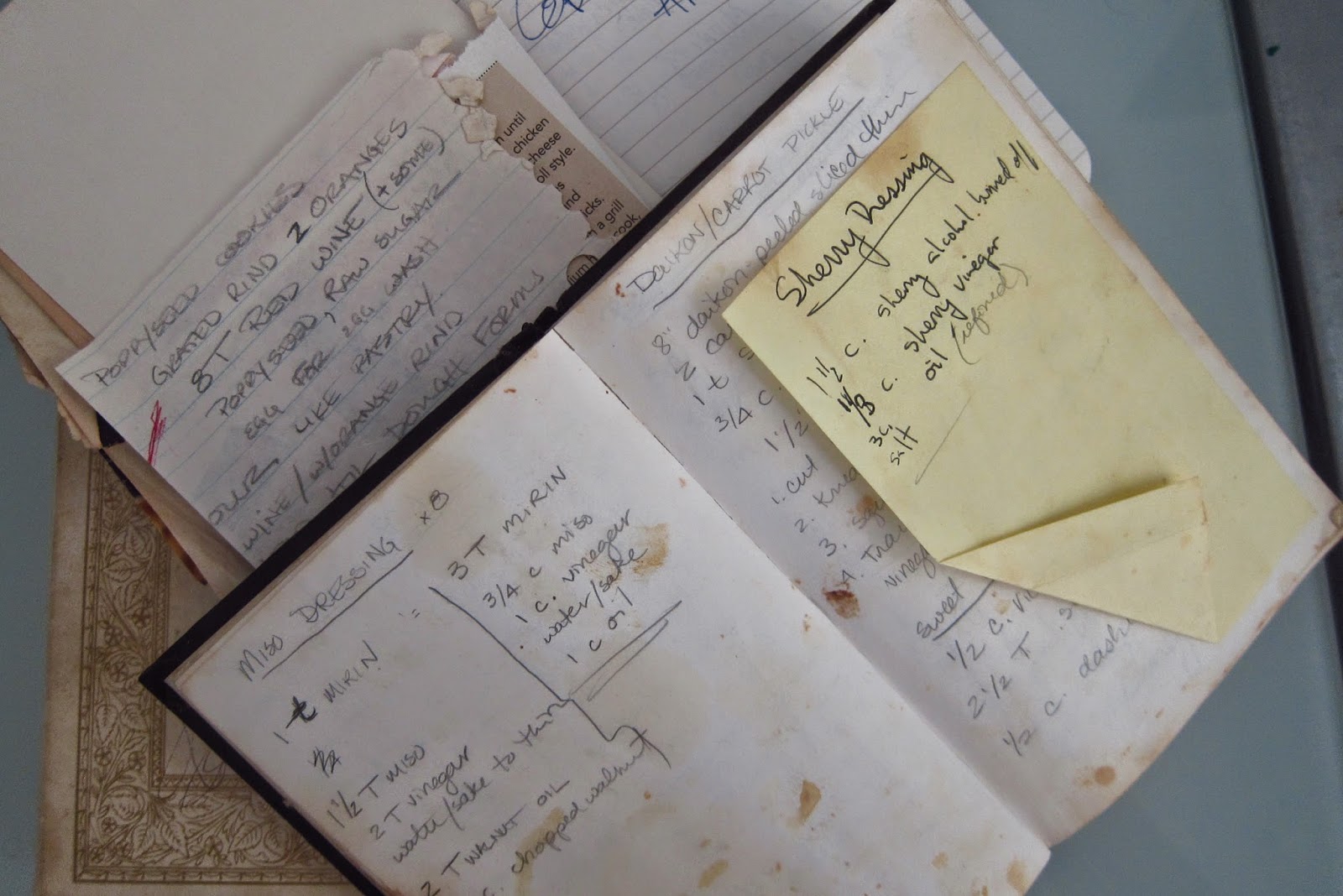 I thumb through a stack of old recipe books--but these aren't cookbooks at all. These are the little notebooks every great line cook keeps in his or her jacket pocket to make notes.

I learned about keeping the books at my first job, working for Peter Hoffman at Stringfellow's, a UK nightclub that wanted to conquer the NYC scene in the mid 80s. The nightclub was flashy, and the menu was awesome. Peter had spent a lot of time in Japan and was using Japanese techniques, French flair, local ingredients and a heaping dose of respect for the food in his kitchen. (I should add he had a heaping dose of respect for his crew, too. I was the only woman in the kitchen, and it was an awesome experience, even when I was closing up and walking out at 2 a.m. after gutting salmon and removing gills--or something.) I never worked so hard or laughed so hard or loved a job so much as I did in kitchens.

But this isn't just about my work in the kitchens. It's about the books. These little books take me through those years. I absolutely loved cooking in restaurant kitchens. I never had any "Kitchen Confidential"-like experiences--never, not once. I worked for Peter, then for Danny Meyer at Union Square Cafe, then I catered in Philadelphia and worked for Jack McDavid there (and worked alongside Bobby Flay before he was a huge name--he introduced his first (I think) book to The Book and The Cook crowd and cooked his dinner at Jack's Firehouse. I made him laugh and made Jack angry at me for muttering under my breath...)

The books have neatly printed pages, where I obviously had some time to actually write. These are far from recipes--lists of ingredients followed by the word: Combine.

The Grill set-up at Stringfellows. It was a big deal for me to move from cold station to grill, but I had to on nights when the rest of the crew left early (always one person stayed behind to cook for the late revelers).

There's a list of sweet desserts for the week I subbed for the pastry chef while he was on vacation. I wasn't great at it, but I tried.

One post-it note in Peter's handwriting. Robert's revised recipe for Garam masala and the beef marinade.

My best friend Michael's notes for tempura batter. I lost him to the AIDS epidemic just a few years later. It was Michael who placed the sticker from the case of Wensleydale cheese onto the front of this book, where it still clings to this day...

The pear pickle I still make at times. Long list of ingredients followed by the commands: Combine. Boil. Simmer 5".

There's a break in the book when I moved to Union Square Cafe--that was push push push from the minute I stepped into the kitchen. The writing is sloppy. I shadowed a youngster, Pete, on day one, and from there on out, I was on my own. Some of the staff resented me, smirking as I tackled about 15 lobsters for the lobster with lemon mayonnaise dish they served back then. The smirks changed when I didn't complain and got everything ready in time for service, then, day by day,  earlier and earlier until I reached a point where I was ready long before service and jumping in to help anyone else. I worked my way through every station in that kitchen, finally expediting (I was good at that) and then, finally, into the office to be steward after I decided to take a break from the kitchen when I was about six months pregnant.

I remember Lars because we made his recipe for gravlax, and I have that recipe, with his  name alongside it

There is Martha's tiramisu, Marcie's truffles and her sour cream coffee cake. Corbin's crepes. (By this time, I had moved on to working in Jack's Firehouse.) A series of vegetarian recipes when Jack tasked me with coming up with some good veggie entrees.

The back of the book is stained but filled with a long list of Family Meal ideas, another job I had at Union Square. We fed the staff well--I didn't want it to be an afterthought, but it always had to be frugal. The lunch shift would sit down late in the day for lunch at 3 or 4 and eat with a glass of wine. The dinner shift would overlap, enjoying the same meal, fortifying themselves for the night ahead.

There's a little diagram of a kitchen setup for a catering event. A list of things that went wrong and ideas for how I could do better next time.

Then, finally, a page introducing my last real line job, at Cobblefish in Manayunk (in Philadelphia). Corbin was chef, the book was a gift from him. There are a few recipes, desserts...I was a help in a small kitchen then, working three and a half days over weekends. By then I had two kids under four. I still loved working but it was tough to be a mom, losing sleep and then pulling shifts, standing for about 10 hours until Midnight and still commuting home. You leave tired but awake. You want a drink and camaraderie. Everyone at home is already asleep after all.

Then we moved. We left the east coast for Kentucky. I loved Kentucky and had big plans to work there, too. The food scene in Louisville is great. But after talking to a few people, I got only offers of starting at the cold station.

I couldn't face that. I took one job, an 11 p.m. to 7 a.m. shift at a local, upscale hotel. I made desserts and breads (all I could think of was if I was the best person for desserts they could find...hmmm.). I was three months pregnant with my third child. I wasn't getting any of what I loved from kitchens to start with--the intense friendships and working relationships that a lunch or dinner shift gave me. I was alone. Quiet. Tired. Lonely. That was when I left the kitchen and started writing about food (and more).

That book has a few half-hearted entries under the hotel name, which I neatly entered after the Cobblefish entries. They look like ideas I had that I wanted to explore. Then I never wrote in that book again.

But I still cherish the books and use the recipes, the lists and notes only I can understand. And I savor the memories, remembering the people I knew and loved and laughed with.
Posted by Babette at 11:16 AM

I lost your link and then recently found it again. Do you still have that wonderful mustard beef stew recipe that you shared so many years ago - probably from one of your black books ? Yum! And love your watercolors! Let me know if you are ever in town. Claudia

Claudia! so good to hear from you. Do I tell you at least once a year that I think of you when I use the wooden bowl we have for salads--that we bought at that wooden EVERYTHING store below you on St. Mark's? I think it at least once a year....I will find the beef stew and send it on to you...It was a culinary school recipe, I think...surely I have it somewhere...