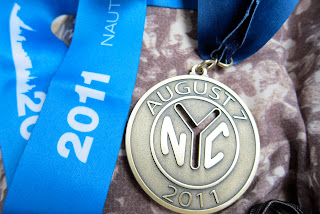 Two years ago, when I was 50, I did the usual medical annual exams. I was heavier than I'd ever been. For the first time, my blood pressure wasn't something to brag about. A colonoscopy (TMI? Too bad.) had benign polyps--that was my third or forth colonoscopy, since my dad died at the age of 50--from colon cancer. Cancer that first showed up when he was 40, if I recall correctly. But it was the FIRST time I didn't have an "All Perfect" result.

And I like perfect.
It was, frankly, a wake up call. Use it or lose it. If I was heavy then? I'd probably be even heavier if I didn't pay attention. Watch what I eat the way I used to. Move more.

All that coincided with a commitment to swim on a relay team for Paul's Posse (read all about it here)--the relay team was doing the NYC Triathlon, and I volunteered to swim.

I did that swim. And about 2 hours after swearing "never again," I was high five-ing teammate Dakila--we were both going to do the whole thing the following year.

Which meant one thing: I'd have to run. And I don't run. But Couch to 5K got me to 30 minutes of running. The same approach got me from 5K to 10K. I continued to eat well. The weight dropped off. I bought a sweet, sweet bike and rediscovered my love of biking. When I finally jumped in the Hudson River for the second time, I had dropped about 50 pounds. I had worked out with a personal trainer and I was in the best shape of my life. That year's annual was just the way I liked it. Zero problems.

Now I call myself a triathlete.

Maybe all our life we get second acts. It's up to us to take on the role.

Congrats. How inspiring. I am turning 40 this year, and just recommitted to running. I signed up for my first 1/2 marathon ever this September (one month after turning 40!).

I hope your "second act" continues to go well! ;-)

Wow this is amazing- you took on the challenge to do something about your life and not just flow along!! But man- when you took that challenge- you REALLY took it!! ha ha! I stand amazed and salute you!

Inspiring. I'm always amazed at where women find motivation...and then stick to it. The hardest part is starting.

I started walking recently for health and sanity reasons. I have two 5Ks under my belt but to swim is so impressive.

You picked such a grand goal and made it. Congrations. And perfect second act story.

Love your triathon story, Barb. That's something I just don't know that I'd ever do. I won't say I wouldn't, because the minute I do that...well, you know what happens. But I love biking. I love hiking. And I love a good long, long walk. I know when you find your right thing, whatever that is, you do keep moving. And when you know what it feels like to feel good, you want to hold onto that. That's what I'm reading from your remarkable story.

Your story is inspiring and motivating. I walked/jogged the Honolulu Marathon for Team in Training for my 50th (from couch to 26.2) and now at 63, my husband and I have decided to sell it all and become citizens of the world. I'm not sure yet what that means but I'm excited about the possibilities. Another first for me is blogging about our adventures and my musings on the whole life change Second Act (or maybe its a Third Act). Thanks and I'll be following you for sure.