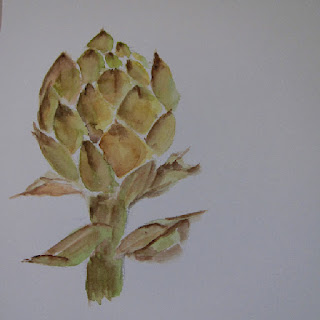 Welcome back to the 2012 Wordcount Blogathon and Babette Feasts, now http://www.BabFeasts.com since I had a bit of a misfire and LOST THE name. (Do me a favor and don't visit babettefeasts dot com. Don't give it page views. I have asked for it back, since I've been doing business as Babette Feasts for YEARS, but there were no replies to the requests. I think I might be written by a machine...I digress.)

Change your bookmarks, anyway, to the new (yes, here it is again: http://www.BabFeasts.com).

Hope to fill the month with tasty treats, photos and now, coming to a blog post near you, WATERCOLORS of ...well, of food (hah. funny. The thing I can paint best? Food...it's true. That's my Artichoke.)

Last May was a sad month for me. 20 days into the Blogathon, my brother died, and that took over the remaining month. The heartache is still there, but I try hard to remember the good times. The anniversary date will be painful, but I hope this month is filled with plenty of joy, too.

My "little" brother David died very suddenly this past May. He was 47.

David was a real intellectual. He had big ideas and frankly, I am sure I didn't always even understand what he was talking about, and we often butted heads over ideas and issues. But we did share one passion: cooking. Any heated debates were quickly forgotten at the dinner table when we--quite literally--broke bread. We would thoughtfully taste, chew and discuss the merits of the loaf at hand, no matter what we'd been arguing about during the day.

David was a bread baker better than any of us, his recipes spreadsheets (formulas, really, weighing in humidity, type of wheat, etc.) that I didn't really understand. In fact, we found his spread sheets on bread and those are pages I will treasure always. Even if I can't bake from them.

Early in the year, in February, I got an email from David asking for savory chocolate recipes. He was on his way to a Slow Food dinner in Redlands, California, where he lived, and the theme was chocolate. He was determined to do something different.

I had just written a short online piece about where to find great chocolate recipes and one website had stuck with me, a site with a lot of savory dishes. After we traded a few ideas talking about possibilities, he tweaked a recipe, making corn cakes topped with his own version of Mexican mole-style chicken and some cheese.

His report back captures David's personality for those of us who knew him and still makes us chuckle, especially reading of his scorn for American cheese "food":
Topped a tablespoon of cornbread batter with a bigger spoon of the chicken mix.  Topped that with a modest amount of mozzarella cheese since I had some handy already shredded -- bad move; should have used the local Monterey jack I bought for the purpose, which is very tasty, or had I thought of it, better still would be supermarket-humble Havarti (which is a great American cheese, IMO, if inexpensive and widely available...at least it's cheese compared to prevalent and therefore so-called American "pasteurized-process cheese food").  15 minutes in the oven and they were done.

Three months after those emails, I found myself in his house, my first time in Redlands, but he wasn't there. His death was heartbreakingly sudden and being there was unspeakably sad and difficult.

We spent a week at his house, cleaning it out, preparing details of the memorial we would hold, sometimes finding laughter in our memories, admiring his garden full of wildflowers, touching pots and pans he touched, always aching for his presence.

One day I peered into the freezer and found a batch of little corn cakes, wrapped in foil and plastic, perhaps a little freezer burned. I knew exactly what they were. I pulled them out, heated them up and had a couple for lunch one day, remembering the process, remembering David, and happy to taste, one last time, one of his creations.

This is a lovely tribute!!!!

A sweet post. What a nice way to remember him. Glad I found you through Blogathon, and I'm looking forward to your posts.

I can taste the corn cakes from reading this story. What a vivid, loving tribute. Thanks for sharing for those of us who didn't get to read it before.