Michy's is a place here in Miami that has gotten fabulous buzz over the last couple of years. And shame on me for not getting there earlier, but finally some good stuff came together and I was able to get there with Gary...and four other women. Lucky Gary, that's all I have to say. But he didn't flinch--because, after all, food was involved...and not just any food, Michy's food.

We are lucky to have "Miami Spice" going on right now. At Michy's that means a three course meal for $36, truly a deal in this year of rising food prices. We got to choose from three appetizers (pork belly, beet salad or carpaccio), three entrees (cobia, papardelle carbonara or veal scaloppine) and three desserts (chocolate panna cotta, cobber or red velvet cake). Among the six of us, we got tastes of all appetizers, two entrees (no one went for the cobia) and all the desserts. Plus the early arrivers ordered rock lobster ravioli (incredible) and the table shared the polenta ("Haunting," according to Laura, who took the lead in getting us together) with some bacon, rosemary and an egg cracked right into it...here's that photo. We dug in a bit too quickly, but I got a photo of the end. Which about sums it up. Yum. 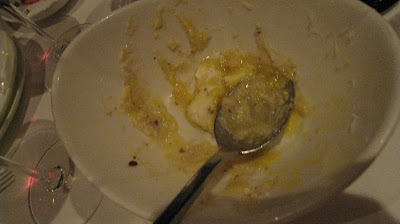 I tackled the pork belly with kohlrabi slaw (yes, they spelled it wrong on the menu...sorry. Had to say it. But every menu needs an editor. Michy's isn't unique)...absolutely the best I've ever had. The slaw was a great balance to the very rich piece of pork belly. And while it's just this little square, that is more than enough...

Most of us got the pappardelle with St. Andre Cheese, roasted tomatoes (I think they were roasted grape tomatoes. Whatever, they were perfect) and Kentucky ham instead of prosciutto. It was rich. The pasta was just right...And I wish I could say I left a bite or two, but...I can't. 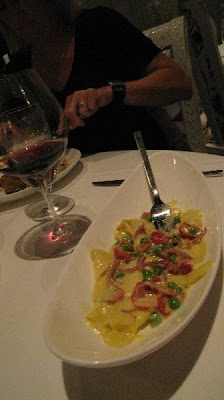 I got cobbler with a delicious scoop of ice cream. I believe mine was all peach--Michy's uses the best of what's in season for the cobbler. The chocolate panna cotta was beautifully done, not so much gelatin that you could detect it and the chocolate giving the whole thing a beautifully velvety texture. The red velvet cake lived up to its reputation: dark red, moist cake, creamy cheesecake frosting sprinkled with red sugar crystals, which gave just the right touch of crunch to each bite. It's all served with a shot of ice cold milk: adorable. 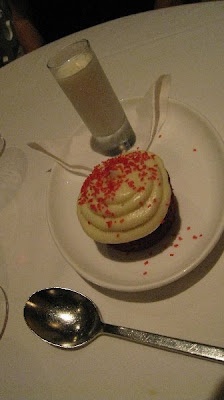 It was a wonderful night. I don't recall such great service, either, in a long time. Professional, unobtrusive and a team effort. Michy's really takes care of its guests. As the night went on, the crowd just swelled, with plenty of people waiting at the bar for tables--and it looked like it would go on well into the night. A great welcoming atmosphere, with some dressed to the nines and others in jeans and crocs...and everyone welcome.
Posted by Babette at 7:33 AM