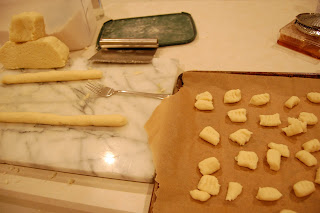 I had to think a moment why I decided I HAD to make gnocchi over the weekend... Then I remembered: Stephen from the Top Chef Holiday special made leaden balls of gnocchi. They were soundly mocked, and I thought to myself I’d better at least make them one time just in case I ever find myself, you know, in a competition having to make gnocchi. I don’t want some judge to drop my gnocchi like a bowling ball on national TV.

So. I checked in with the crew at WineLoversPage.com kitchen forum. They sent me to read Lidia Bastianich’s recipe...and so I began. Whole potatoes in their skins, boiled til tender. Cool slightly, put through food mill (Lidia prefers a ricer, but guess what: I don’t own one). Then let them dry and cool. Add eggs and just enough flour. Roll, cut, press against fork tines, boil. I served mine with brown butter, fresh sage and grated parm. If you look at the photo above, they do look a bit rough, but my cutting technique improved rapidly--it had to; this recipe made a gazillion little pillows of potato pasta.
Posted by Babette at 10:09 AM