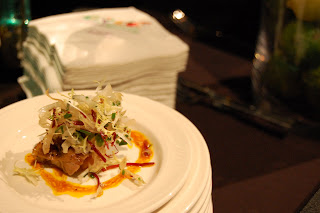 My dear daughter, Bryn, and I went to Epcot for the International Food and Wine Festival, which is held every autumn. What an event. In addition to the regular pavilions, countries set up kiosks with regional foods and regional drinks...The lines were a bit daunting, but we nibbled at Ireland on a potato pancake, a.k.a. Boxty, and Bryn tasted leek and potato soup...her verdict: It is cold. Yup. It was hard for her to take a cold soup. The boxty was tasty. We also stopped at Italy for wonderful tiramisu and a made up concoction that was very yummy: the Italian Margarita. Hey, limoncello, grappa and margarita mix. How bad could it be?

The big event was Party for the Senses, which you had to have tickets to. Once again, we were overwhelmed by the size of Epcot. Because we just didn’t know where we were going. We got all the way to The Americas, where our pass gave us reserved seating to Jon Secada (we missed him as we wandered in the wilderness known as Epcot)...but where was the event? Surely we didn’t have these VIP passes only to have to wait in line for food like the mere mortals sans passes....Nope. I DID have to call the number and confess my stupidity to the Disney operator. She set me straight and directed us to the World Showcase (as differentiated from the World Show PLACE)...Once we entered, though...ahhhhhh.

The event was crowded, but the lines (the few there were) moved quickly. We got plates that held a wine glass (Bryn drank Evian) for any number of tastings we wanted. My favorite had to be the Fairy Tale Cuvee from Iron Horse, which seems fitting for a trip to Disney, right?

While we wandered, we got one great dish with a “strange” sauce. Bryn asked what it was....hmmm. To tell her or not to tell her? It was crab...She liked it, so I figured I’d tell her. Big mistake. After nearly being sick, she quickly turned to desserts and played it safe for the rest of the evening. She was my photographer, too. (That is her shot of duck confit with carrot oil above.)

Yikes, I almost forgot--we got to eat at Todd English’s Bluezoo at the Dolphin, too. A spectacular meal, but more later.
Posted by Babette at 8:31 AM