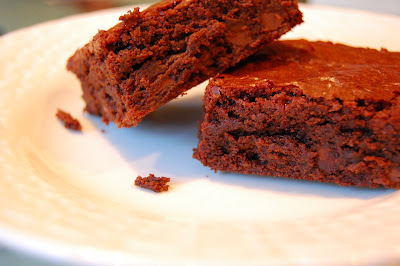 One of the comments on the TWD (Tuesdays with Dorie for those of you new here) brownies entries from one of the many visitors there was that those Rum Raisin brownies were good, but Ina's were better...Oooh. Them's fighting words. And Rachel, she who bakes, swears by Ina's..and we've discussed them before. We almost always get around to how her husband won't eat them because of the THREE CUPS of walnuts in them..Being a brownie purist, I can empathize, Mike.

So I decided to make Barefoot Contessa's Outrageous Brownies without three cups of walnuts. But first can we just take a moment to discuss the number of people the Contessa's recipes feed? Gazillions. And Ina, gorgeous as she is, is not a rail. Dorie's recipes feed, say, 12. 12 Madeleines. That's all. Dorie? A rail. A gorgeous rail, but...a skinny baker. Who wants 12 madeleines? (Me. All twelve of 'em.) If you've got a single teen in the house, four go to him (hi, Ian!)...Dorie's brownies. 16: that's 16 2x2-inch squares. Ina's Outrageous brownies? A half-sheet tray full.... 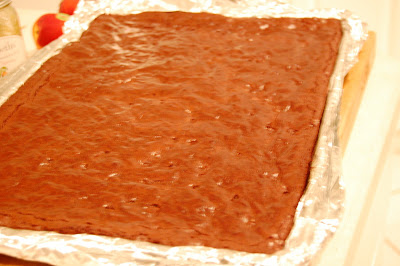 Just an observation I've had to make.

Back to the brownies. Lots of butter, some unsweetened chocolate. Coffee. Did I say butter? Then you add extra chocolate chips. Chocolate, chocolate and more chocolate...Then she says cut them into three by three squares. No thanks. I couldn't eat all of a 2x2 square-- 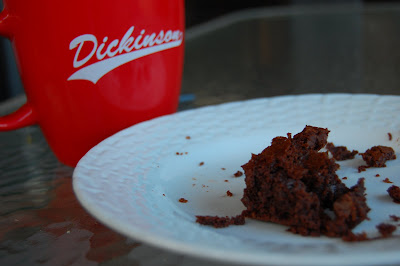 but not because they weren't good. Heh. And not because I didn't try. These are Outrageous. I will def. add these to my mix...

I packed a bag and froze them for Rachel (she was in Costa Rica playing in the sun, poor girl) and marked them with a "Don't Eat!!" They survived, and she got them yesterday. Mike, my fellow brownie purist, gave them pretty high marks, I hear. I think Rachel missed the walnuts.
Posted by Babette at 12:03 AM

Aren't those brownies just the best? I make them all the time and they freeze really well. No nuts for us, although I am sure they taste really well with them.

I love these brownies too. Definitely one of my favorite brownies. I love your comments on how many this recipe makes compared to Dorie's! I've made them both with and without nuts and love them either way.

It's funny how often I still pull down that original Barefoot Contessa book. It remained my all-time favorite book for a long time based on the desserts. Everything, except the fruit tarts, was fantastic.

And you're right: the brownie recipe, and the pecan bars recipe, too, if I remember correctly, yields enough to feed a small country.

Good gravy, those are rich brownies. I'm sure they're absolutely delicious though. So, Dorie's raisin brownies: I wrote about them on my blog a month or so ago--loved the brownie, hated the raisins. I thought I'd like them, but they were just distracting. Dorie seems to like raisins, and so do I, but I personally would rather have my fruit and chocolate separately:) Currently, my fave brownie is one of the King Arthur versions that just uses Dutch process cocoa and chocolate chips--no other solid chocolate, yet they're great. sorry I wrote a novel here:)

oh goodness, these truly are the best brownies i've ever made/eaten/been around...and now...i might need to make them again this weekend!! thanks for the reminder about their outragousness! :)