Ahh. Finally...Catch up time is happening. 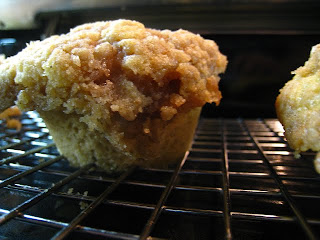 We are all busy. I get it. But making sweets when I'm also trying not to get TOO fat while I'm trying to learn to bake thanks to Dorie? All too often, TWD is the item I cross off the list.

So it's been since those apple turnovers that I baked. I haven't been idle in the kitchen--mucho testing for Florida Table's spring issue has been in the works. Plans for the FLX CRUISE where I will talk about food writing is in the works. I am hoping to squeeze a photo shoot (or two) into the next seven days..and another one between now and the end of November. Whew. Life is busy. Oh, and in the middle of it all? I'll make a second home in North Carolina (Charlotte, to be exact. If you know anyone who needs to hire a brilliant, funny, hard-working writer/editor/recipe developer/cooking teacher/photographer/web writer/videographer...ETCETERA? Let me know. And write me a recco while you're at it._

I digress. How very shocking.

Okay. So. Around 5 p.m., I was determined: determined to bake off whatever TWD had to toss out. And lucky for me, it's the delicious allspice muffins. What a treat. Everything is in the cupboard (umm, I had a nervous moment when I saw only whole allspice and was eyeing the coffee grinder/spice grinder...then my fingers lit on the ground allspice bottle). And streusel topping. Mmm.

The flavor of allspice is a treat. That combination of warm spices I love so much without anything just jumping out (who else thinks Americans have a heavy hand with cinnamon?)...the perfect blend without being a blend at all. Some supreme being knew what she was about when she created allspice.

The treat is also in the streusel. MmmMMMMMMM...I love me some streusel. The ratio is often 1: 1:1 (1 part flour, 1 part butter, 1 part sugar), but Dorie cuts down ever so slightly on the butter and adds 1/2 teaspoon allspice. Mmm. Did I say that already?

I scooped maybe too big of muffins (only got 10...said the chef to my hips) and I think I pressed the topping into the muffin a titch too much. I've baked before where the topping falls off...but I pressed a bit too much and, as you can see by the photo, the topping become too much one with the muffin.

Of course, that had no effect whatsoever on the taste. And that taste would be fabulous. Go check out the recipe at Grandma's Kitchen Table, a fearless TWD-er if ever there was one. Thanks for the pick, Kayte! Then check out the Blog roll at Tuesdays with Dorie and read about all the other bakers.
Posted by Unknown at 7:36 PM

Would you just look at all that wonderful topping??? Yours look fantastic. I can almost taste it from here...great job on photo and muffin. Thanks for baking with me this week!

Wow, you do sound busy! I often feel barely afloat at our house. Glad you loved the muffins. We enjoyed our chocolate chip coffee cake! Thanks for stopping by my blog.

Beautiful muffins. glad you are back baking.

You have such great texture in the topping. Beautiful.

Ok, where's my warm muffins for breakfast!? Those look awesome!

Yeah, baking sometimes gets in the way of other life goals, like eating healthy. :-P These muffins look wonderful. I don't think they're too big at all!

I love the look of your muffins. Im sorry I had to miss this one. Thank you for your kind words on my blog...I will be back for the Biscuits!!

Glad to hear you got to fit these in- and that they were worth it!

Sometimes it feels like the busier I get, the more I start baking. Kitchen therapy, I suppose. I'm glad you were able to find the time for these. Yours look gorgeous.

The muffins look delicious. Your crumb topping is amazing. Yummy is right.

Your muffins look fabulous! Welcome back to TWD! This was my first one in a while too. So glad I made these muffins, though.

Welcome back - a good choice for your return to TWD. My muffins were too big too so I did the desperate scrape out of one tin and place into another process to get 12 of varying sizes.

Better pressed in than falling off, I say!
Looks great!

The topping was heaven! I thought my muffins were over flowing too--but they tasted just fine!

I think your muffins look great! My streusel slid off for the most part, but the muffins were still tasty. This was a good recipe to come back to bake with! Great job.

These look so good. Wish I was going on the cruise so I could hear you talk about food writing!

Welcome back!! Your muffins look great.

Well, they look delicious to me. The topping looks nice and thick and perfect.

yum, a food blog! just found your blog (via flx) and love what i'm seeing...just wish i was tasting!

I think your Allspice Crumb Muffins look fantastic, especially the streusel topping! I have to admit, I'm one of those that has a heavy hand with the cinnamon - I can't help myself I love it so much! =)

I am such a slouch when it comes to baking, but those muffins may just get me there.

The photo alone was enough to draw me right into the story. Sounds like a great recipe.