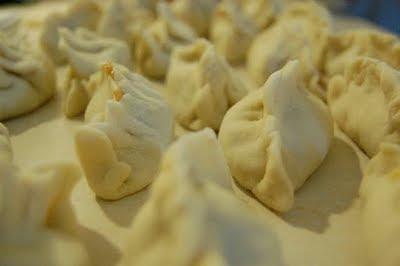 That title is totally true. One of my daughter's favorite shows is Throwdown on Food Network. (They SO should have picked me to at least BE on their Next Food Network Star. But I digress...)

Did you know I cooked with Bobby once? Oh, that's right, I am SO going to name drop here. I also cooked at Union Square Cafe in NYC, worked for Danny Meyer, who is still the best boss I ever had. At one point the entire lunchtime kitchen was female and we rocked it out. I was an expediter extraordinaire. That was AFTER I worked my way through every single station in the kitchen. I could COOK. Hmm. Where was I going with this?

Ah. Then I moved to Philadelphia. I actually called Danny to ask him what he heard around town about where to cook in Philly. One place was Jack's Firehouse run by fiery-tempered Jack McDavid, with whom I ultimately became friends...in fact if he ever yelled at me...Oh, no..THAT is where I was going with this, because he totally yelled at me the night Bobby Flay came to cook at Jack's Firehouse to introduce his first cookbook, a beautiful book called Bold American Food. (Nice styling.) We were banging out a menu based on recipes from the book. I was carefully picking cilantro, when Bobby came over and said, No, just Grab it and go! Then we were lining up plates to serve some other dish and Jack scah-REAMED at me for being too slow (we were FINE. Bobby was fine...) I think earlier Bobby had asked if I ever missed NYC...I said diplomatic things about no, I had kids now, Philly was easier...(truth was I missed NYC desperately)...blah blah blah...but when Jack decided to yell, I just muttered under my breath: I miss New York NOW. Made Bobby laugh, made Jack even madder at me...but like I said, we parted friends. And I still get to say I cooked with Bobby Flay.

ANYWAY. So the other night, Bobby has a throwdown with Shohui Kim of The Good Fork in Red Hook, NY, doing Chinese dumplings. I LOVE dumplings. LOVE them. When I asked Bryn what she wanted to eat the next night? Dumplings just like they made on Throwdown.

I pulled out Blue Ginger by Ming Tsai, a book full of recipes that have never steered me wrong.

I'd made dumplings at my first restaurant job, Stringfellow's in NYC with Peter Hoffman (who has that video? Remember the song: Peter Hoffman, Peter Hoffman, there's a telephone call for you...Or in the video, Roger in the walk-in? Socks-with-Sandals Roger...heh..) but that was...(coff coff) decades ago. (I made shumai more than these....but still)

It looked simple..even the dough. I altered it some...chopped chicken instead of pork, savoy cabbage (no need to soak it)--my tweaks. The recipe made 50 (that's right, FIFTY) dumplings...for a cost of about $4 or $5...A plate of these costs $6 around here. You make them, saute them, add water to steam them, then let that water evaporate...They. Are. Perfect. 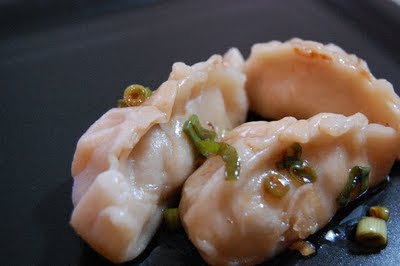 1. Make the dough. Bring water to boil. While it heats, place flour and salt in bowl of stand mixer fitted with dough hook, whisk together. Add about 1/4 cup of boiling water to flour, mix in slowly. Drizzle water in with mixer on lowest speed. When all water is added, increase speed to medium and knead for about 10 minutes. Cover with plastic wrap and let rest 30 minutes.

2. While dough rests, mix filling ingredients--all of them--together in bowl.

3. Divide dough in two. Flour board or counter lightly. Roll one piece of dough into long "snake" about 1-inch in diameter. Slice into 1/2-inch rounds. Roll each round out into approx. 3-inch circle. You should get about 25 circles. Place bout 1/2 tablespoon filling in center of each dough circle. Fold dough in half and tightly pinch and pleat edges together. Press each one down slightly to get flattened bottom.

4. Heat oil in large, cast iron skillet over medium high heat. Add dumplings to skillet (I crowded mine and it worked...) and cook until bottoms are golden brown, about 4 minutes (be careful not to burn). Add water all at once and cover skillet. Reduce heat to medium-low, keeping it simmering. Cook without disturbing for another 7 to 8 minutes. Dough will swell and cook. Uncover and cook until all water is evaporated. Serve hot.

i can attest to that very night and Jack Screaming about this and that and in the end we all had a great service, ate habanero peppers and drank some shine and cider outta tea cups! That Sweet potato gratin Bobby did was amazing!

Hahaha, Corbin...oh, I could make a fair few posts on our time together, right? After I read your post, I really laughed out loud when I remembered the time when Jack asked (rhetorically) "Can't you filet a salmon?" And you said no. Umm. Pretty sure he wasn't expecting you to answer at all, let alone in the negative (especially in the negative, of course, since you'd probably perfectly cleaned a salmon a gazillion times in front of him), but once you said no...and how you stood there silently and watched him do it in the middle of crazy service.

It was that or yell back, right?

And then we probably stood around and drank some shine outta tea cups, ate a few habaneros, laughed and went home.

To this day, I tell people how much fun it was cooking. And really? It was. In spite of it all sometimes.

mmm i love potstickers :) Have never tried any of Ming's recipes before. Looks like this will be the first! :)

You crack me up.

I remember eating at Jack's Firehouse with my then-boyfriend-now-husband after his college graduation. His parents and grandma were there, and his grandma ordered shad roe, something that to this day I cannot say without giggling.

These look fabulous. I may make them for dinner tonight! I used to make homemade gyoza (dumplings) with my children when I had fewer children and more time! They loved rolling out the dough.

Great story and great looking recipe, Barb, thank you! I've never made dumplings - might try them this weekend.. Celia

This is making my stomach growl. I love dumplings. I've made them using frozen wonton wrappers, but never made my own dough. Clearly I need to.

I've never liked Bobby Flay though. I guess I don't like the idea of cooking that has to be in your face, mine is better than yours.

Can you come cook for me? I've never tried Chinese dumplings but they look yummy!

Wow! Thanks so much for the recipe. I LOVE dumplings too. You make it seem to easy. I'm definitely going to try it.

I saw the same episode late one night. Funny how you were inspired to MAKE the dumplings while I was inspired to order dumplings for lunch. =)