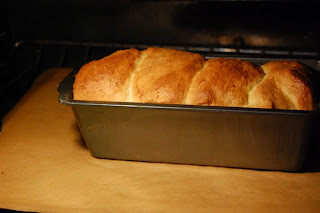 Wow. It was one baking morning. As noted below, after an early start, I had the loaf rising and the sticky buns rolled, cut and rising by about 7.45 a.m. The sticky buns were a definite success.

I did as I was told--egg wash, baked at 400. I cannot believe how lovely this turned out. As I said elsewhere, every time I make bread--even something that sounds as daunting as brioche--I wonder why I don't do it more often. Sure, this brioche recipe has 12 ounces of butter in it (that means the little loaf has half that--6 ounces..I started slicing very thin slices once I realized that...), but that's the only expensive ingredient in it...even a plain, Publix baguette costs me $1. I'd say the extra bit of money for this particular loaf? Worth it. 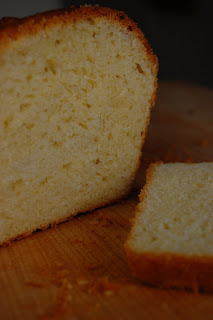 The bread is so rich--you SO taste the butter--I am happy eating it all by itself. A brioche purist, that's me. I could picture it with some bitter orange marmalade, though...Or I'd like to try the bostock Dorie mentions...spread stale brioche (who gets a loaf to last til it's stale?) slices with almond cream, sprinkle with sliced almonds, bake until the almond cream is puffy and hot.

But I don't think it will last long enough.
Posted by Babette at 2:30 PM