A few weeks back I decided I had to make a carrot salad that used something called za'atar. Padma Lakshmi, she of Top Chef Fame, has just released a lovely new cookbook called Tangy Tart Hot and Sweet.

I immediately made the salad with black plums and yuzu dressing for a dinner I was going to. That was a big hit. But the carrot salad was looking particularly tempting. And for that, I needed za'atar. Za'atar is a blend of spices that includes sesame, thyme, oregano, sumac...and other stuff.

A friend had introduced me to a cool little Persian grocery store about 15 minutes from our home, so one Sunday afternoon, I bribed Bryn into being my company (I bribed her by promising a stop for new ballet slippers first...oh, and a stop at the vegetarian Indian buffet at Udipi Cafe, where they serve complimentary dosas...Mmmm. I digress.)...After browsing a bit, and plucking a tin of wonderful French feta from the refrigerated section, I was getting nowhere in my search for za'atar...when I asked the clerk, all I could remember was azatar, but that didn't ring a bell for her. I made a quick phone call, had my husband pull the cookbook from the shelf and he found it: za'atar (me? I'm thinking the clerk would have made that connection, but that is neither here nor there...) Of course, she recognized the correct spelling instantly. Of course, they were out of the blend.

I left with a nice stash anyway: feta cheese, pomegranate molasses (so sweet! so tart!), rosewater (yes, I plan on rosewater and pistachio ice cream, because I've eaten that at Saffron's Persian Restaurant in Louisville, KY, a restaurant owned by one of the nicest restaurateurs I have ever met: If you go to Louisville, visit Saffron. I digress. Again.), whole cinnamon sticks and saffron sugar cubes (which I had to hide from the family before they treated themselves to every last cube)...

But no za'atar. As luck would have it, though, I had locked the keys in the car. That necessitated a call to Gary to bring the spare key and a trip to the nail salon nearby to pass the time waiting for him to reach us. No hardship there...but the luck comes in because as we turned the corner, what should we find but another Middle Eastern grocery store (as well as about three Middle Eastern restaurants that will have to be tried in the near future)...and THEY had the za'atar.

I haven't made the carrot salad yet...but I will. In the meantime, here's a nice photo of my wonderful groceries: 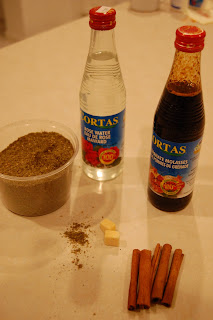 So glad you found that za'atar - and with such a stroke of serendipity! The pomegranate molasses sounds divine too.