Not quite Two Years Ago...And I am thinking One Year from Now...NYC Triathlon...

It occurs to me that I am out of shape..And that two years ago I was in the best shape of my life. My little band of partners (a.k.a. Paul's Posse) just finished the NYC Tri last weekend and I found myself wishing I had run it!

So this week, I've done some jogging. Today I just rode 8 miles and I SUFFERED through them. To do the NYC Tri, I need to swim about a mile, bike about 24 miles and then run 10k.

Sounds daunting. But Hey. I need a project. 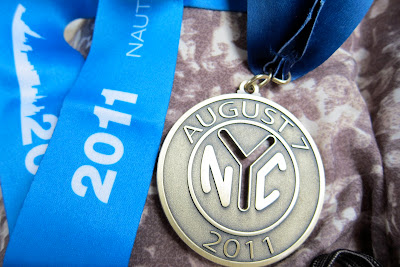 You MUST check out Amy's highlights, one of which was Amy, her sister Jill and me riding our way from hotel to transition zone through the streets of NYC. AWESOME. (I didn't make any of the photos because I felt like such ...yuck.)