A most dangerous game...clotted cream.


My husband waxes a bit rhapsodic about clotted cream. And I think I never quite got what the fuss was about. The name is awful. No one wants to eat clotted anything. And to top that off,  it is difficult, if not impossible, to find in the U.S. But over the summer (I think), I had some at a tea in Argentina, a tea at El Alvear, an old-school-elegant place.

That tea was dinner. We had two complete teas, plenty for three. We cleaned up every crumb, were stuffed...and then they wheeled over the cake cart...Didn't I feel foolish when I had to eat MORE??

But (and again, I am almost certain it was at Alvear that I had the clotted cream...) after the cucumber sandwiches and before that cake cart, I spread clotted cream on my baby scone (in Bath, England, you have to say scone to rhyme with gone. Go on, practice. Got it? We'll continue), it was this surprising marriage of butter and cream. The best of the two (and I'm the person who doesn't like whipped cream on anything)...it was delicious and all of a sudden I got it.

And that was that. Until recently, when DH mentioned it again. One quick google later, I had a recipe in my hot little hands (okay, on the hot (no, really, it DOES get hot) little laptop). Thank you to Cupcake Project and her easier-than-you-think post on homemade clotted cream.

I used only a pint-and-a-bit of cream. I didn't want to invest too much into it if the experiment failed. That went into an All-clad (my fave! No, I don't get paid to say that!) saucepan and into the 180 degree oven, which might explain why this doesn't get sold here in the U.S. (If I die, point them to this post and tell them I cooked cream at 180 degrees for about 13 hours AND THEN ATE IT.)

Frankly, I thought my experiment had failed, because it looked like...well, it looked like nothing more than slightly reduced cream. But I persevered. Into the fridge it went for another eight hours.

Ooh, and the next time I looked? THERE WERE ALL THESE CLOTS IN THE CREAM. I scooped them out. I probably have about one cup of clotted cream and one cup of cream (minus delicious clots) that I can still use to cook with, says Cupcake Project.

And here's the other thing that I forgot from my taste over the summer. There is also this caramelization that goes on while the cream reduces...So it's a flavor of butter and cream and caramel all in this one creamy spoonful. 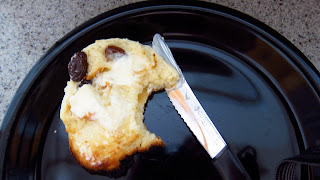 I had to stop what I was doing and enjoy a teaspoon of this decadence on a bit (heh. That doesn't look like a bit to me!) of a scone-rhymes-with-gone. Even though I'm heading out to lunch in about 45 minutes.

Experimenting with food...a most dangerous game for my waistline (yes, I did get my run in. Oh, btw? I'm training for another bit of crazy, the Bermuda Triangle Weekend in January: 1 mile of Friday, 10K on Saturday and a 1/2 marathon on Sunday. What? When did I EVER say I would never run more than a 10K? Oh, right. ALWAYS. Liar liar and all that...I take it back. I digress.)

Here's the procedure: pour cream into oven-safe pot with lid. cover and cook in 180F degree oven for about 12 hours. Cool on counter, then move to fridge (still covered) until completely chilled. Remove skin or clots from cream. Save cream for another recipe, spread clotted cream on...on...on everything.

Also, Cupcake P says don't use ultra-pasteurized cream. I forgot that caveat and used what I had, which was, indeed, ultra-pasteurized. Flavor is great, but I'm willing to bet you can get more yield and nicer, smoother results from cream that is just plain old pasteurized.