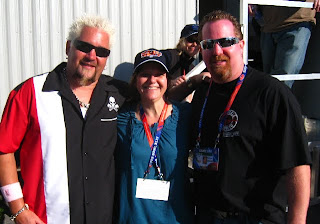 Early last week I got an email out of the blue--someone at Guy Fieri's company had gotten my name--did I want to do the food styling for him at the Super Bowl.

Umm. YES. There was a bit of back and forth and I don't think I was actually confirmed to do the event for sure until Tuesday or Wednesday, which left me four days to prep for three appetizers Guy had developed using Ritz crackers, the sponsor of his live segment.

Oh, except there was rehearsal on Saturday. Now I had three days. Oh, and I was working on other projects until Friday at noon. Now I had 24 hours to be ready for rehearsal Saturday.

It still wasn't a problem. I had all day Friday, I could work late and I could be at the stadium early Saturday and cook until the 2 p.m. rehearsal.

HA. What I didn't factor in was:

That long Saturday turned into a longer cooking session until midnight Saturday. A few hours sleep and I was back at the stadium--only this time, no one could come get me with a golf cart--security was even tighter on Sunday than on Saturday.

But Sunday (except for continued wind) went off without (almost any) hitches.  Guy is a pro...realizing I'd forgotten to lay out crackers for him to top on camera (remember: wind), he didn't miss a beat, got the job done.

I'm happy to say I fed those announcers excellent, hot (and SAFE) food.

Guy was a real joy, his team real pros. They all made me look great.

Of course, I had to break out a Florida Table for Guy to sign, so when all was cleaned and packed away, I packed up his knife and the stack of caps CBS had given him to take back to his home team in California, I asked about it. He disappeared for a minute or two--huh? Longer than it should take to sign a magazine, right? Then came back and started a little speech about it being disrespectful to sign the magazine, because he would be covering the faces of chefs he didn't know...I'm sure my big smile started to falter a bit...until he broke out his knife, the box signed and presented it as a gift to me.

I swear to you, I got misty (remember, I was really tired, but still...I was touched)...and then, THEN? Then we took the photo. That's Guy, Me and Kleetus/Kevin. That's me with the goofiest, happy grin I have ever seen on myself.

But I still rocked it out and it was pretty much fun. Okay, no, it wasn't fun. I cried on Saturday as I left, I was THAT TIRED. But it was worth it.
Posted by Babette at 11:21 AM

Yay, Barb!! What an experience! Congrats, girlfriend. I'm thrilled for you.

What an adventure for you, Barb! Great read, emotional I'm sure, but that's what memories are made of. Good for you! :)

Who said this job isn't without adventure! Thank you for all your long hours and hard work! I know it was a tough one, but you hung in there and I owe you a cocktail or two at the closer at SoBe! See you then!
Korina

I am searching for the recipe for the buffalo wing meatballs that were featured on the super bowl segment, any ideas?

Brian, the recipes have not been release yet; I hope to link to them when they get posted, perhaps at Ritz.

Oh, how exciting! It sounds like it was a challenge for sure, but I'll bet he was thrilled with your work.

Buffalo Chicken Meatballs. If / when you find recipes for the rest, shoot me a note?
dorablenights@yahoo.com

Until just now, I had "no" IDEA there was a movie called Babette Feasts! I feel absolutely terrible! Of course I immediately asked hubby to find the movie on Netflix so they could send us a copy next. =)

You are my hero! You foodie prepped for Guy and did a wonderful JOB!

Saw your spotlight on SoFL Food and Wine. So you'd be pasta? Me too! I was interviewee #3.

This is my first visit to your blog and I had great visit. Love your writing style.

Hope we get to meet at one of the foodie events.