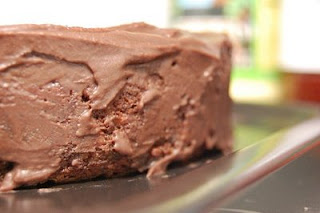 Or is that chocolate RUM cake? Because that is what was in my cupboard. And I couldn't stand the thought of making another stop for the brandy.

Oh, and do you know any other 13-year-old who got chocolate rum cake for her birthday cake? That's right, readers, I am so obsessed with TWD that I did not even ask her what kind of cake she would like. She was getting chocolate armagnac (or rum) cake that got Dorie fired. And no, in answer to your question, of COURSE she didn't know there were prunes in the cake.I had to make this while I was also making bimini bread, dressing for a salad, cutting papaya, frying hominy (don't ask. I fried three times and will probably fry again tomorrow.), making coleslaw, watermelon granita...is there anything else? Because today was prep day for a photo shoot. And my back is KILLING me.

Back to the cake. It was easy...I love these one layer cakes. They aren't always pretty. 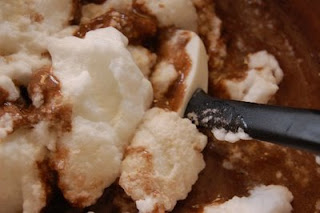 Burning off the rum was interesting...because it burned and burned and burned. Guess there's a lot of alcohol in there. Yum. (Yes, it's out of focus, but I couldn't resist trying to get the flame.) 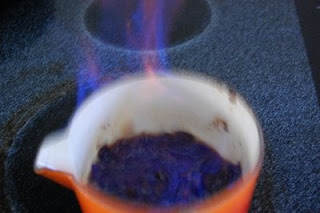 Here's the thing. I timed it perfectly so it should have come out of the oven at the exact time I had to drop Bryn off at dance class. I came tearing in, timer was going off, I ran up the steps...it got about 5 minutes extra and was looking pretty toasty on top (and my oven really is 375. I have an oven thermometer in there.), but when I moved it, it jiggled. Like undone jiggled. But Dorie's instructions say it should be wet still...I don't think she meant jiggling.

Okay. So. Cool ten minutes, take ring off, flip over, take bottom off, flip back upright. Except, a crack and oozing batter appeared when I did that. 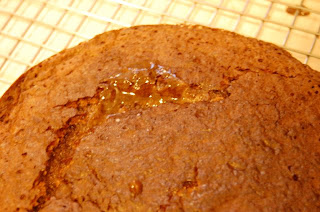 The cake is now a Chocolate Rum MOLTEN Cake. Not Dorie's at all. Oops. 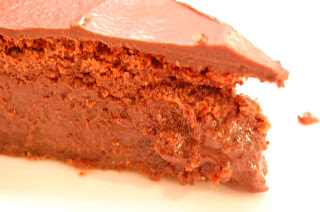 But. It is even better than I could have expected. I love how easy the glaze was. It's like a truffle coating. As if it needed something extra. (Ha.) And really, it's barely molten at all once it was in the fridge. It's super rich, but it was a huge hit. Bryn didn't suspect the prunes, not one bit.

And it goes great with a glass of Marques de Caceres Rioja 2004. By the way.
Posted by Unknown at 9:53 PM

Looks fantastic - I would never have known prunes in a torte/cake would be so good. Or raisins for that matter. Yes, the glaze was the best part wasn't it? Glad you had fun making it AND eating it! Nice work!

Your cake is beautiful! Mine was rather flat, but still really good!

Your cake looks gorgeous! I really enjoyed this recipe, but too many dishes LOL

Mine did that same thing, but it set up enough to deal with it in the end. How on earth did you have enough dishes to make all of the other things you were making AND this cake? I barely survived all the bowls and pots.

Did she figure out there were prunes in it?

I ended up using French Brandy...not enough alcohol to even produce a flicker, let alone a flame.

Wow sounds like you had a busy day. I'm glad the cake was a hit. Happy Birthday to your daughter.

Wow, that is a lot to do. I hope she had a great birthday and enjoyed the cake. It looks great.

I bet you needed Marques de Caceres Rioja 2004 after all that. What a special dinner.

Wow, you definitely deserve a glass of wine after that whirlwind day. Your cake looks fabulous!

"Great cake. Even if it was underbaked, it is still good. Lucky 13 year old.

Sounds like quite a day! Great job on the cake!